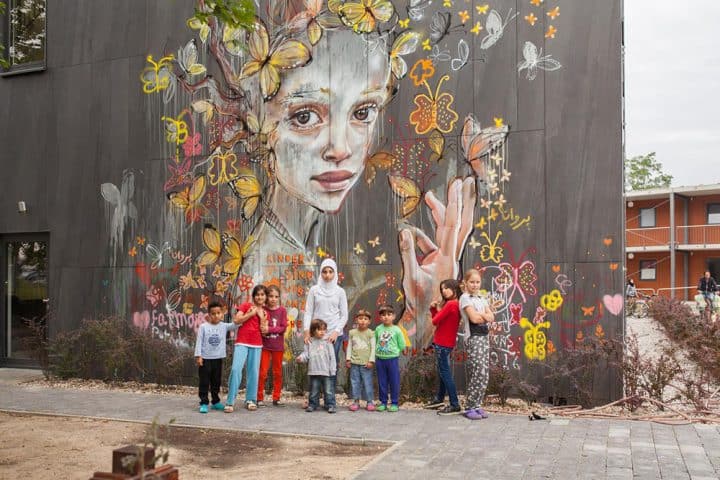 German street art duo Hera and Akut of Herakut have been traveling the world since 2004, filling canvases and walls with their collaborative form of painting. Each piece offers a glimpse into a character or scene, usually accompanied by a bit of text providing a bit of context or perhaps further intrigue. Their creative process begins with Hera setting each figure’s form and proportions, while Akut fills in the photorealistic details. Via Vertical Gallery:

Hera is a classically trained painter who creates gestural, emotional figures in a freestyle manner using numerous tools including spray cans, brushes, and her hands. Akut is a self-taught painter who is skilled in creating hyper-realistic images of animals and flesh using only a spray can. What initially seemed like an unlikely pairing both conceptually and technically has since become one of the foremost collaborations in urban art and an innovative presence in contemporary painting.

Seen here is just a slight glimpse into their work over the last few years, you can see much more on Facebook and on their website. Herakut most recently had a solo show at Zara Gallery in Jordan, and in July, Hera had a solo show titled “Where do we go from Hera?” at Vertical Gallery in Chicago. (via StreetArtNews) Baudelaire on the Genius of Childhood – @Brainpickings.org0 (0)