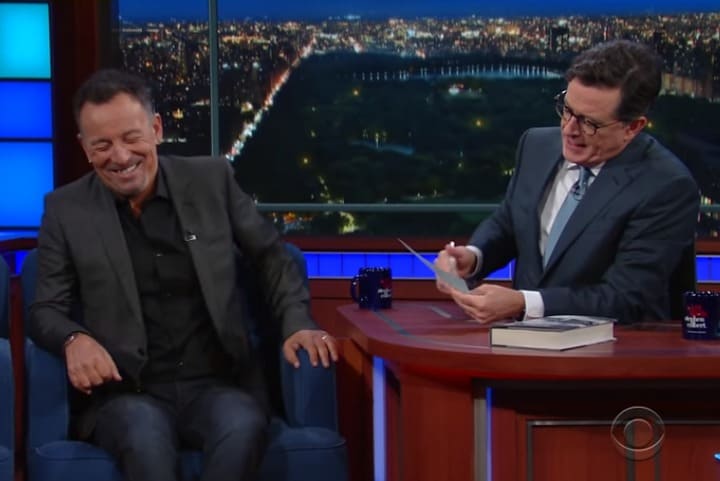 In new book ‘Born to Run,’ Springsteen opens up about childhood, womanizing, endless tours and the band he’s had for 40 years.

After quickly canvassing his legendary catalog, Springsteen began listing his personal faves. “I got to put ‘Born to Run’ up there. I guess for me, ‘The Rising’ is a big song. What do we play every night? We play ‘Thunder Road’ really regularly. ‘Nebraska’ was a good one,” Springsteen said.

After rifling through the first four picks, Springsteen starts taking recommendations from the Late Show audience, and after some thoughtful deliberation, eventually settles on his fifth pick, “Jungleland,” only to immediately replace it with “Racing in the Street.” “These are everybody’s top five, by the way,” Colbert joked of Springsteen’s picks.

Colbert also fielded a question from an “anonymous member” of Springsteen’s band, who wondered why, during a concert in front of 50,000 fans, the rocker would “occasionally, spontaneously” call out a song the band has never played live before.

“The entire band is bar band veterans, so they played hundreds of nights before we ever stood out in front of an audience… so there’s a common well we draw from,” Springsteen said. “If someone says ‘Play “Wild Thing,”‘ you’ll be fired from the E Street Band if you don’t know [that song].”

Springsteen also credited the “little man under the stage” who runs Springsteen’s teleprompter and delivers the lyrics to the spontaneous performances – whether it’s “Friday on My Mind” or Katy Perry’s “Teenage Dream” – within seconds. 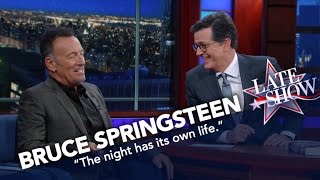 Springsteen stopped by the Late Show to promote his autobiography Born to Run and its companion album Chapter and Verse, and much of the singer’s long interview with Colbert revolved about anecdotes from Springsteen’s past, the music that inspired him as a young artist and the E Street Band’s epically long concerts, which sometimes border on four hours in length.

“The band doesn’t complain until around three hours and 40 minutes,” Springsteen said. “It’s that last 20 minutes that for some reason even makes the E Street Band [angry]… slightly, someone may mention it to me. Why they go that long? I’m not exactly sure. I’ve been doing it for a long time.” Springsteen also called his concerts “medicinal” to him. 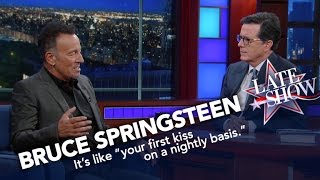 At one point in the interview, Colbert quotes a line from Born to Run, but Springsteen has difficulty placing what the sentence is in reference to. “It’s a good book, you should read it,” Colbert quipped to Springsteen. “I don’t know about you, but I cried when I read it. It’s really a beautiful book.”