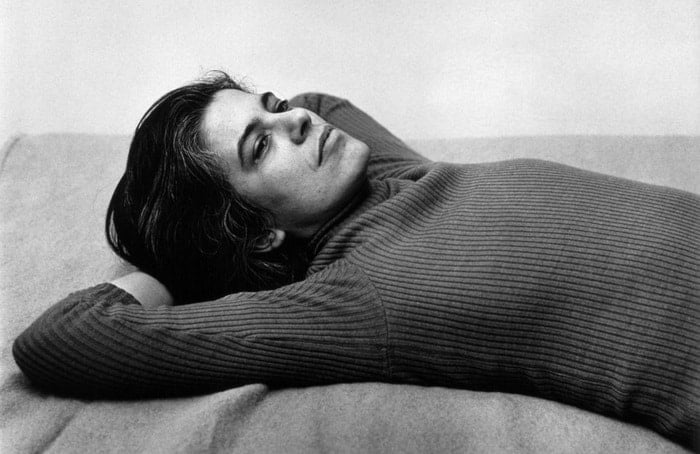 “Life is a movie. Death is a photograph,” Susan Sontag (January 16, 1933–December 28, 2004) wrote in The Benefactor, her 1963 debut novel. That year — the year she turned thirty and began writing her masterwork  Against Interpretation — she met the photographer Peter Hujar (October 11, 1934–November 26, 1987). The shared sensibility Sontag instantly intuited was further affirmed three years later when Hujar showed her the extraordinary photographs he had taken in the Catacombs at Palermo, which impressed themselves upon Sontag’s imagination so profoundly as to become the landscape of the final scene in her second novel, Death Kit.

In 1976, a year before she published what remains the finest, sharpest, most prescient thing ever written about photography, Sontag agreed to write the introduction to Hujar’s slim, stunning coffee table book Portraits in Life and Death (public library) — a collection of his Palermo photographs alongside uncommonly soulful portraits of people in his life, including John Waters, William S. Burroughs, Fran Lebowitz, John Ashbery, Candy Darling, his partner David Wojnarowicz, and Sontag herself.

Sontag’s introduction examines how photography mediates the relationship between life and death, and has only swelled with significance and cultural relevance in the decades since, as we have shuttered and pixelated our way into this life-as-commemoration-of-itself age of ours. She writes:

Photographs turn the present into past, make contingency into destiny. Whatever their degree of “realism,” all photographs embody a “romantic” relation to reality.

I am thinking of how the poet Novalis defined Romanticism: to make the familiar appear strange, the marvelous appear commonplace. The camera’s uncanny mechanical replication of persons and events performs a kind of magic, both creating and de-creating what is photographed. To take pictures is, simultaneously, to confer value and to render banal.

This dual function, Sontag argues, renders photography a vehicle of mythmaking, embedded in whose claim to immortality is the pulsating awareness and even fetishizing of mortality:

Photographs instigate, confirm, seal legends. Seen through photographs, people become icons of themselves. Photography converts the world itself into a department store or museum-without-walls in which every subject is depreciated into an article of consumption, promoted into an item for esthetic appreciation.

Photography also converts the whole world into a cemetery. Photographers, connoisseurs of beauty, are also — wittingly or unwittingly — the recording-angels of death. The photograph-as-photograph shows death. More than that, it shows the sex-appeal of death.

Reflecting on Hujar’s subjects, who “appear to meditate on their own mortality,” Sontag considers the strange and rather delusional defiance that defines our relationship with death, that most natural and inevitable of experiences — a defiance that has only grown more vehement and belligerent in the decades since, with only occasional beacons of lucidity. Half a millennium after Montaigne observed that “to lament that we shall not be alive a hundred years hence, is the same folly as to be sorry we were not alive a hundred years ago,” Sontag writes:

We no longer study the art of dying, a regular discipline and hygiene in older cultures; but all eyes, at rest, contain that knowledge. The body knows. And the camera shows, inexorably… Peter Hujar knows that portraits in life are always, also, portraits in death. I am moved by the purity and delicacy of his intentions. If a free human being can afford to think of nothing less than death, then these memento mori can exorcise morbidity as effectively as they evoke its sweet poetry and its panic.

Hujar died in 1987 from AIDS-related pneumonia. He was fifty-four and had outlived many of those he photographed, also taken by the Plague. The book’s dedication, emblematic of Hujar’s largeness of heart, reads simply: “I dedicate this book to everyone in it.”

No Thoughts on Susan Sontag on How Photography Mediates Our Relationship with Life and Death – @Brainpickings.org0 (0)