I’ve seldom seen concert footage that was as inherently interesting as this 51-minute documentation of Can’s legendary “Free Concert,” recorded in Cologne’s Sporthalle on February 3, 1972. The show was filmed by Martin Schäfer, Robby Müller and Egon Mann for director Peter Przygodda, who is primarily known as the editor on many of Wim Wenders’ movies, including Wings of Desire, Paris, Texas, Alice in the Cities, and The American Friend. Similarly, Müller was Wenders’ main cinematographer and also shot several of Jim Jarmusch’s movies, including Dead Man, Down By Law, and Mystery Train.

The circumstances of this Cologne show were unusual. Rather improbably for such an experimental band, Can actually scored a chart success in Germany with “Spoon,” which would later be tacked onto the end of Ege Bamyasi. For reasons I don’t fully understand, the success of that song, which had been used in a German crime TV show called Das Messer (The Knife), led to this free concert, which was attended by approximately 10,000 people. In his 2006 book on Can, German writer Robert von Zahn explains that the concert did much to improve relations between the “communes” and “rock music,” whatever that means.

Note that the movie is not simply a concert film, it is a blend of a concert film and a documentary, with footage of Can during the Tago Mago sessions and in an airport, doing a soundcheck before the show, etc.

The resultant show was an odd mix of uncompromising music-for-music’s-sake and a well-nigh circus-esque determination to entertain. Right off the bat Can breaks into the hit, “Spoon,” and proves they’re not fucking around by expanding it from its tidy three-minute length on record into a full-blown 18-minute jam. The concert starts out with a juggler named Fred Ray joining Can on the stage; at the end of the show, during “Full Moon on the Highway,” Ray returns and does a bunch of impressive things with three brightly colored umbrellas.

After “Bring Me Coffee or Tea” about halfway through, a troupe of acrobats called Oberforstbach comes out and does their thing while Paul Joho plays the saw. (I know, right?) And of course Damo himself was not exactly boring to watch in his own right.

The movie as seen here is one of the primary attractions of CAN DVD, which was released in 2003. CAN DVD also includes the 86-minute “Can: Documentary,” “Can Notes,” and “A Short Tribute Film To Can By Brian Eno.” 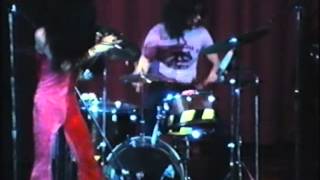 The Mission give update on ‘monstrous’ new album – @TeamRock0 (0)