Fear In a Petri Dish: Why We Love a Character Twist – @Signature Reads0 (0)

In real life, nobody wants a Jekyll and Hyde friend … So then why do we love it so much in art?

The other day, I was telling a friend about this guy. This guy, I said, purports to be one person, but he is really another person. He leads two lives.

I love that movie, my friend told me, and I echoed this. So do I.

I love “The Talented Mr. Ripley” almost as much as I love “The Usual Suspects.” “Sleeping with the Enemy” is the absolute best. And then there’s Gone Girl, and, of course, Jekyll and Hyde. Most people haven’t actually read Jekyll and Hyde, but we all know what it’s about.

My friend asked me what I was going to do about this guy I’d met, and I said nothing. I don’t want a Jekyll and Hyde friend.

Obviously, one answer is entertainment. We love a good twist. That’s the moment we read for or watch for – the big aha, the long sigh after all the hours of suspense we’ve put into this. I think, also, it’s because the only thing we love more than being wrong is being right.

In real life, nobody wants a Jekyll and Hyde friend … So then why do we love it so much in art?

The most successful twists are moments in which we can look back and see how it all fits together so perfectly. All those eerie little clues that we had kind of wondered about, but we weren’t really sure what they meant at the time. Think: the final montage in The Usual Suspects. We look back and think: The writing was on the wall. We say: We knew it! With the good twists, we didn’t actually know it know it, but we almost knew it! We were right about our hunches! 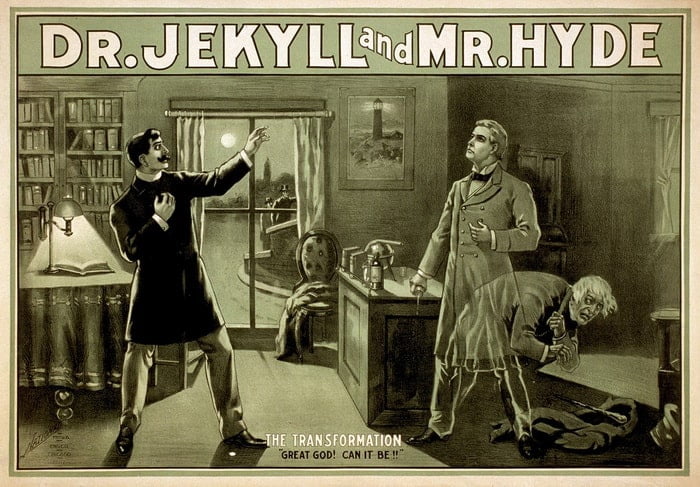 When you really think about it, though – or at least when I do – the fact that we find pleasure in sitting back and absorbing fictions about deception, and about the cruelties of humanity in general, is kind of bizarre. Isn’t there already enough suffering in the world? Why, after we turn off the news and make some comment about our planet’s impending doom, do we then watch a war movie? Why do we sign up for more anxiety?

The near cousin of anxiety is excitement, so that’s one reason. It’s fun to feel a little scared. It’s fun to ride roller coasters. We like to freak ourselves out in make believe worlds, where the experience is manageable and where there is a clear endpoint. Fiction is a comfortable place to deal with our fears. There are no consequences. It’s also a way to make the really scary stuff in the world more human. Do we cry when the newscaster says 800 people died today, or do we cry when the major character in the war movie finally dies, after an hour and a half of getting to know him so well that we feel like he might be our brother?

I wonder if cavemen had the equivalent to this. Did cavemen sit around the fire pit, grunting out stories of deceit and misery (followed by redemption, of course)? Did they create excitement by riding their mammoths at high speed? Or were they already kind of preoccupied, and kind of anxiety-ridden all the time anyway, about, you know, survival?

One of the many things we have that cavemen didn’t (besides everything) are words – words to describe the shared experience of our freaky fictions. Which is why, when my friend said, Jekyll and Hyde, I knew exactly what she meant. It put the whole thing into perspective, really. I mean, I probably wasn’t going to call that guy anyway, but now that he’d been named a Jekyll and Hyde, I definitely wasn’t calling. I could just read the book instead, or watch “The Talented Mr. Ripley,” and experience all of my anxiety at home alone, with the comfort of fro-yo, in the time span of 140 minutes, and then it would be over.

No Thoughts on Fear In a Petri Dish: Why We Love a Character Twist – @Signature Reads0 (0)