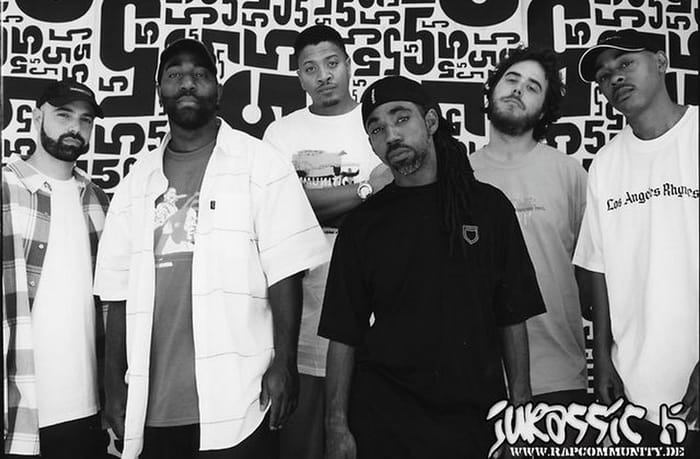 In late 1998, Los Angeles, California’s Jurassic 5 burst on the scene with a self-titled EP. First released on the Pan imprint, the 37-minute project would eventually be re-released through Interscope Records, as part of the major label’s commitment to Underground Hip-Hop, which also included Eminem and Planet Asia.

That EP would introduce many to the melodic crew formerly known as Unity Committee. Once fixtures of the famed Good Life Cafe in South Central, the J5 collective included MCs Chali 2na, Marc 7, Zaakir, Akil and DJ/producers Cut Chemist and DJ Nu-Mark. An unlikely six-man collective, the crew was a callback to pioneering Hip-Hop outfits such as Cold Crush Brothers, Soulsonic Force, and Grandmaster Flash & The Furious 5.

Cut Chemist, who would later exit the group in the mid-2000s, showed his abilities early. The Jurassic 5 EP included “Lesson 6: The Lecture.” Inspired by 1980s Tommy Boy Records DJ/producer Steve “Steinski” Stein (who would appear with Cut in Scratch), the record was a cut-and-paste creation, using found elements, a beat, and a moving narrative. Steinski (and early partner Double D) had built a career in the 1980s through doing this to chronicle events such as the rise of Sugar Hill Records, the assassination of President John F. Kennedy, and the musical impact of James Brown. “Lesson 6,” which followed “Lesson 4,” from Bomb Records’ 1995 Return Of The DJ, Vol. 1 compilation, showed that J5 was a full-fledged, multi-element Hip-Hop crew.

Earlier this week, Cut shared a 1995 demo of “Lesson 6” he recently found. As Jurassic 5 ramps up with some exciting new records, this early iteration shows that by the time J5 would become a charting purebred Hip-Hop juggernaut, the whole crew had been putting in work, individually and collectively.

As a soloist, Cut has released a number of mixes and 2006 Warner Bros. Records album The Audience’s Listening. With Chali 2na, he was also once a key player with Latin-Funk group Ozomatli.

Colourflow: Dizzying Experimental Particle Animations and Renderings by David McLeod – @This Is Colossal0 (0)