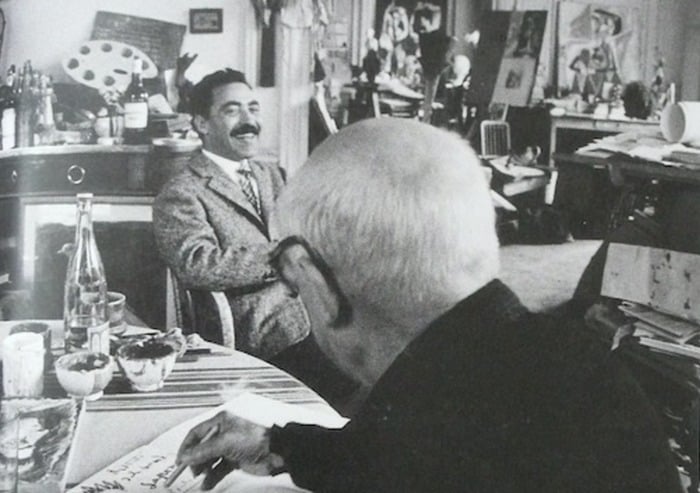 In her review of TJ Clark’s new book Picasso And Truth: From Cubism To Guernica, art critic Jackie Wullschlager writes about how meaninglessness replaced absolute truth in the 20th century epoch of terror and totalitarianism, and that “in our age of performance and body art, Clark brilliantly posits a Picasso who replaced a truth project with a performance project, playing, dazzling, persuading.” Pastels given to Sapone by Picasso, including the portrait made on April 1, 1957

In his personal life as in his art, these characteristics were foregrounded by Luca Masia’s book about Michele Sapone, Il Sarto di Picasso (Picasso’s Tailor).

“Picasso is a little model,” Sapone told Time magazine in 1971. “I have made him velvet robes, kilts, jackets embroidered in the Yugoslav manner. I assure you, he wears them with majesty.” Sapone in the fitting room at his atelier, 14 rue Châteauneuf, Nice, 1960 Il Sarto di Picasso’s photographs reveal much about the interplay between master tailor and illustrious client, all the while placing the Italian Sapone, his wife Slavka and their daughter Aïka dead centre of Continental Europe’s mid-century artistic milieu. Sapone was the recipient of works by leading artists, though when recalling the first time he was offered one in exchange for a suit (by the Florentine artist Manfredo Borsi) he confessed: “I had never looked at a painting in my whole life; I looked at women.”

Aïka, meanwhile, modelled for Giacometti and her Libro d’Oro (one of the so called “golden books” published privately by Italian nobility) features work dedicated by Picasso, other clients and those in the family’s social circle, including artists Jean Arp, Alberto Burri, Sonia Delaunay, Hans Hartung, Paul Mansouroff and Gino Severini and the poet Jacques Prévert. Photograph of Alberto Giacometti by Yoshi Takata with note on reverse to Aïka Sapone, 1959 Sapone (right) with the painters Anna-Eva Bergman and Hans Hartung in the Grand Hotel, Juan-le-Pins, mid-60 No Thoughts on Picasso’s Tailor: Michele Sapone The Artist Of Fashion – @Flashbak0 (0)