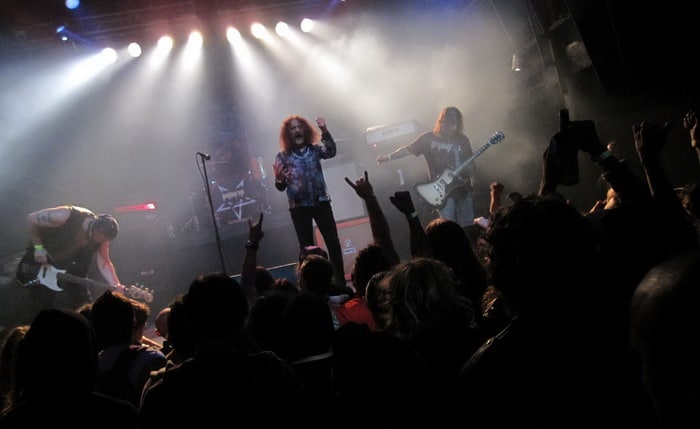 Forty-five years into their acclaimed career, metal pioneers Pentagram are just now getting around to releasing their first promotional video. 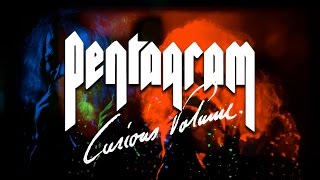 As you can see above, the video for “Curious Volume” — the slow burning, anthemic title track from the group’s most recent album — combines live performance footage with travel scenes and an excellent blend of visual effects, filters and mixed media reminiscent of Oliver Stone’s work on Natural Born Killers.

Relax, nobody dies. In fact, there isn’t even any blood. As frontman Bobby Liebling explains, the idea is to celebrate and share the hard work behind the band’s longevity. “We wanted our first ever video to, in a way, be a connection to the past as well as the present,” he said. “The song can be interpreted as a personal and collective journey that we’ve been on for close to half a decade. It’s a trip that’s both physical and mental and I feel that [director] Dave [Hall]’s end result illustrates that for us and everyone. The video stands as both an escape and an introduction to us as artists and people. You can feel the rigors and rewards of tour life through the visuals. We love the stardust and psychedelics as well as the raw rock ‘n’ roll energy felt throughout the song and video alike.  We hope you connect with it like we do.”

Curious Volume, features 11 catchy compositions by Liebling, guitarist Victor Griffin, bassist Greg Turley and drummer Pete Campbell. The group will be appearing as part of the Psycho Las Vegas festival at the end of August, alongside a stacked lineup that also features Alice Cooper, Blue Oyster Cult, Electric Wizard and dozens more. For the latest news and tour dates from Pentagram, visit their official website.