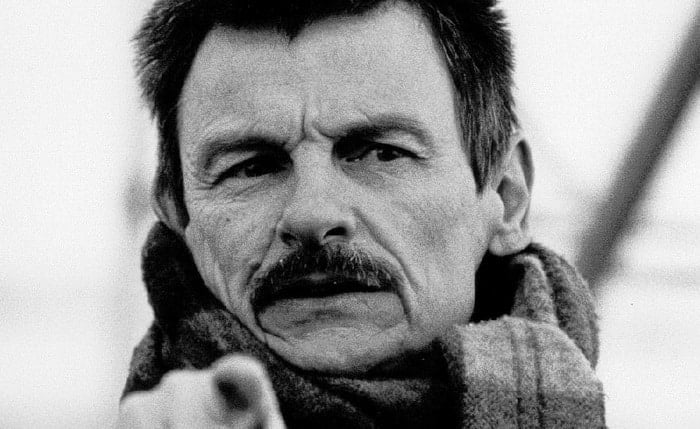 Though a filmmaker of strong personal convictions, artistic and otherwise, Andrei Tarkovsky made films that endure in part because they open themselves to a multiplicity of interpretations. Nothing in the Tarkovsky canon opens itself up to quite such a multiplicity of interpretations as Stalker, which continues to produce fascinating new works derived from their creators’ experience of the film, such as Geoff Dyer’s Zona: A Book About a Film About a Journey to a Room, the S.T.A.L.K.E.R. series of video games, and even a segment of the Slavoj Žižek-starring documentary The Pervert’s Guide to Cinema, which you can watch below.

“We need the excuse of a fiction to stage what they truly are,” declares the philosophical, cultural, and political provocateur over footage of what many consider Tarkovsky’s masterpiece. He describes it as “a film about a ‘Zone,’ a prohibited space where there are debris, remainders of aliens visiting us.” The titular professionals he describes as “people who specialize in smuggling foreigners who want to visit into this space where you get many magical objects.” The ultimate goal of all who make the harrowing journey to the Zone? “The room in the middle of this space, where it is claimed your desires will be realized.”

Not a bad summing-up of the premise of a movie even whose biggest fans struggle to explain. But Žižek, of course, takes his analysis further, bringing in Solaris, Tarkovsky’s 1972 adaptation of Stanislaw Lem’s science fiction novel about a planet that can read the minds of the humans in orbit around it, “an id machine as an object which realizes your nightmares, desires, fears, even before you ask for it.” With Stalker, Tarkovsky envisions the opposite, “a zone where your desires, your deepest wishes, get realized on condition that you are able to formulate them. Which, of course, you are never able.”

If you subscribe to Žižek’s reading of the films, it actually makes perfect sense that they could continue to find new, enthralled audiences: the human relationship to desire remains as fraught as ever — and perhaps has only gained fraughtness as we find ways to satisfy our desires — and both Solaris and Stalker find artistically striking new ways to dramatize it. And according to Žižek, the respected filmmaker also provides a solution: “religious obscurantism,” a “gesture of self-sacrifice” of the kind we see made in his final films, Nostalghia and The Sacrifice. Tarkovsky also sacrificed himself, but for cinema, and so created some of the most formally remarkable motion pictures ever made, ones in which, in Žižek’s words, “we are made to feel this inertia, drabness of time,” and even “the density of time itself.” If you wonder what he means by that, as ever, you’ve just got to experience Tarkovsky for yourself. A number of his major films you can watch free online.

Fear In a Petri Dish: Why We Love a Character Twist – @Signature Reads0 (0)

Assassin’s Creed International Trailer Dials Back The Kanye West, Is So Much Better – @Cinemablend0 (0)