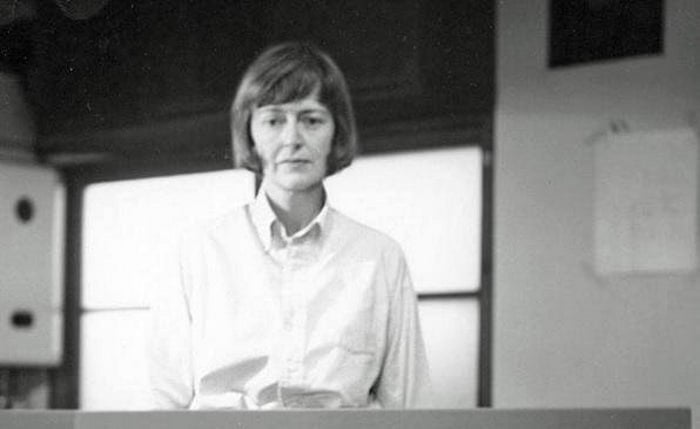 Artist Anne Truitt on Love, Loss, Regret, What Makes Marriage Work, and the Syncopation of Grief and Gladness – @Brainpickings.org0 (0)

Perhaps because she was trained as a psychologist, artist Anne Truitt (March 16, 1921–December 23, 2004) had a special attentiveness to the inner life of the creative spirit and a great gift for articulating that aliveness with lyrical nuance in her prolific diaries. She wrote especially beautifully about the parallels between being an artist and being a parent — an insight forced upon her partly by circumstances as the demands of the latter role swelled in intensity after she divorced her husband, the journalist James Truitt, in 1969. She became the primary parent of their three children — Alexandra (age 14), Mary (age 11), and Sam (age 9) — and then a single parent after James’s death in 1981. All the while, Truitt remained an artist of remarkable discipline and integrity, continuing to create work that would render her one of the most significant, visionary, and influential sculptors of the twentieth century.

Emanating from her distinctive sculptures, where vibrant colors possess and are possessed by muted minimalist shapes, is a certain subtle dialogue between gain and loss, between what is and what isn’t, or perhaps what never was and never could be.

Nowhere is this syncopation of grief and gladness more resonant than in one particular entry from the altogether magnificent Turn: The Journal of an Artist (public library) — the same volume that gave us Truitt’s timeless wisdom on vulnerability, the price of artistic integrity, and what sustains the creative spirit.

Truitt writes in August of 1983, when her son was twenty:

I was in the kitchen the other day when Sam read me a line of Borges: “You can only lose what you have never had,” and I have been thinking it over ever since. The truth is instantly recognizable; it might almost be a platitude. But it came at me at an angle around a corner from his lair of books in Sam’s reflective voice, and touched a sore spot in my memory of his father.

For when I mourn, I do mourn what he and I never had: the lovely entire confidence that comes only from innumerable mutual confidences entrusted and examined. And woven by four hands, now trembling, now intent, over and under into a pattern that can surprise both husband and wife. I miss the rich doubling of experience that comes only from such confidence, the nuances of refraction and reflection, nourished and enhanced and underwritten by the sweet union of familiar bodies — touch and smell, tidal.

But the most piercing point of mourning, Truitt observes, is that of regret — the irremediable regret of having held back, of having let the fearsome vulnerability of being hurt preclude the grand reward of being truly understood. She writes:

I mourn my failures to confide. I should have had more courage, dared, risked rejection, even ejection — naked, awkward, crouched as Eve in Masaccio’s Expulsion from Paradise. “Should” is a dreadful auxiliary word, and worst when linked with “have,” rendering an act one never thought of at a certain time, or thought of and decided not to do, as effective and inexorably irrevocable as a deed done.

I mourn what I did not know when I was married: the necessity for honesty between people if mutuality is to bud out of a status quo into air it can then fill with a new form. When I saw how one of the Australian gum trees, the angophora, thrust out new branches, I saw how a marriage could work: a nub pushes out from a fork and as it grows into a branch (there are wide-branched trees) the bark of the tree’s trunk spreads smoothly over this rough, crude juncture so that it joins the other branches seamlessly, enhances the whole tree’s amplitude. The bark is purple, tan-pink-violet. There is warmth in its seal.

This poetic image of growth through sealing and healing together reminded me of Jane Hirshfield’s beautiful poem “For What Binds Us,” included in her altogether sublime 1988 collection Of Gravity & Angels (public library):

FOR WHAT BINDS US

There are names for what binds us:
strong forces, weak forces.
Look around, you can see them:
the skin that forms in a half-empty cup,
nails rusting into the places they join,
joints dovetailed on their own weight.
The way things stay so solidly
wherever they’ve been set down —
and gravity, scientists say, is weak.

And see how the flesh grows back
across a wound, with a great vehemence,
more strong
than the simple, untested surface before.
There’s a name for it on horses,
when it comes back darker and raised: proud flesh,

as all flesh,
is proud of its wounds, wears them
as honors given out after battle,
small triumphs pinned to the chest —

And when two people have loved each other
see how it is like a
scar between their bodies,
stronger, darker, and proud;
how the black cord makes of them a single fabric
that nothing can tear or mend.

But as she continues her diaristic meditation, Truitt suggests that perhaps regret — the regret of not having conjoined each other’s woundedness boldly enough in order to mend and grow together — is the one thing that can tear a relationship, or the memory of a relationship. She reflects on her gum tree epiphany:

I am saddened that I learned this truth so late, but the ironic fact is that I only came to realize it because of what my children taught me while I was bringing them up alone. The staunchness of their affection and the openness of their hearts slowly brought me to an emotional courage for which I had simply never before had the security.

No Thoughts on Artist Anne Truitt on Love, Loss, Regret, What Makes Marriage Work, and the Syncopation of Grief and Gladness – @Brainpickings.org0 (0)