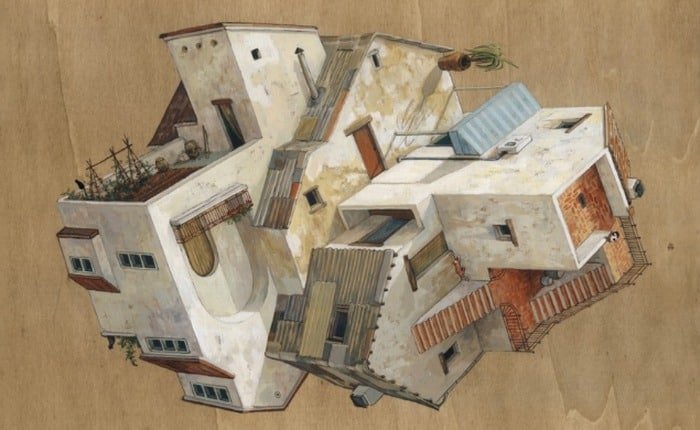 It’s not easy to look at a painting by Spanish artist Cinta Vidal, but the work is worth it. The directions of up and down are twisted and inverted like an MC Escher sketch, giving the eye a hard time knowing where to start looking. Each scene is rendered with architectural precision, drawing the eye to delve deeply into one corner of the work. When the time comes to connect these details to the rest of a scene, however, a viewer can be left head-scratching. Reconciling the physics of one of her scenes is like solving a puzzle with your eyes.

Vidal has been illustrating professionally for eight years, developing her architecture-distorting style back in 2013. Today, she sells her work in prints ranging from 20–50cm2, but she previously years spent training as a scenographer for the theater from the Escola Massana in Barcelona, and an apprenticeship at Taller de Escenografia Castells Planas in St. Agnès de Malasanyes helped make Vidal’s method ideal for street murals. “There I learned to work on a large scale,” she tells The Creators Project. “Just half a year ago I started to paint my own murals, and I’m enjoying it a lot.”

Collaboration with Uriginal in Barcelona