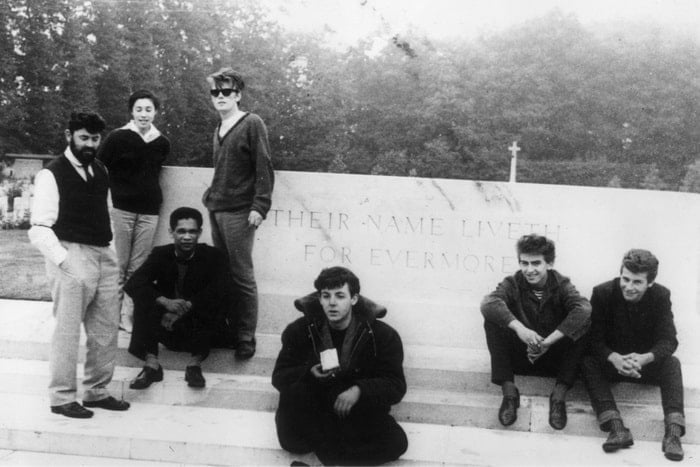 A friend of John’s Lennon‘s from the Liverpool College of Art, Stu Sutcliffe was the original bassist in the Beatles. In July 1961, upon the conclusion of their second residency in Hamburg, Germany, Sutcliffe quit the group to concentrate on his art career.

“Paul [McCartney] and I got to know Stuart Sutcliffe through going into the art college,” remembered George Harrison in the Beatles Anthology documentary. “Stuart was a thin, arty guy with glasses and a little Van Gogh beard; a good painter. John really liked Stuart as an artist.”

With money that he had earned from selling one of his paintings, Sutcliffe, at Lennon’s urging, bought a bass guitar and joined the band towards the end of 1959. But there was one main problem.

“He wasn’t really a very good musician. In fact, he wasn’t a musician at all until we talked him into buying a bass,” said Harrison. “We taught him to play 12-bars, like ‘Thirty Days’ by Chuck Berry. That was the first thing he ever learnt. He picked up a few things and he practiced a bit until he could get through a couple of other tunes as well. It was a bit ropey, but it didn’t matter at that time because he looked so cool. We never had many gigs in Liverpool before we went to Hamburg, anyway.”

Their first trip to Hamburg was in August 1960, and a few months later, while playing at the Kaiserkeller, they were befriended a pair of Germans who would have a significant impact on the band’s style. “All my friends in art school used to run around with this sort of… what you call Beatles haircut,” recalled photographer Astrid Kirchherr. “My boyfriend then, Klaus Voormann, had this hairstyle, and Stuart liked it very, very much. He was the first one who really got the nerve to get the Brylcreem out of his hair, and asking me to cut his hair for him.” Though it has been noted that John Lennon at first laughed at Stuart’s new do, one by one, they all caught on to it.

Sutcliffe and Kirchherr quickly fell in love, but the Beatles first spell in Hamburg came to a quick end when they were deported because Harrison was not yet 18. The Beatles returned in March 1961, a month after Harrison’s birthday, and the couple resumed their affair. But when their residency ended, Sutcliffe informed the others that he was leaving the band to be with Kirschherr and continue his studies at the Hamburg College of Art, where he had received a postgraduate scholarship.

As a result, McCartney wound up taking Sutcliffe’s instrument. “When it became clear that Stu was leaving, I asked him in the transition period to lend me his bass, which, for me, was upside down,” recalled McCartney.

Unfortunately, while living in Hamburg, he began suffering headaches and collapsed a few times. On April 10, 1962, only three days before the Beatles began their third and final residency in Hamburg, Sutcliffe died of a brain aneurysm.

“I looked up to Stu. I depended on him to tell me the truth,” John Lennon told writer Hunter Davies in 1968. “Stu would tell me if something was good and I’d believe him. We were awful to him sometimes. I used to explain afterwards that we didn’t dislike him, really.”

Gay Talese Steps Back From His Upcoming Book, ‘The Voyeur’s Motel’
0 (0)

No Thoughts on 55 Years Ago: Stuart Sutcliffe Leaves the Beatles – @Ultimate Classic Rock
0 (0)