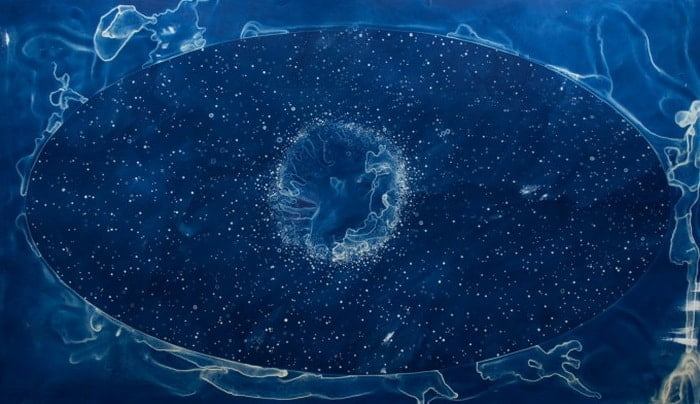 Your Body is a Space That Sees: Artist Lia Halloran ’s Stunning Cyanotype Tribute to Women in Astronomy – @brainpickings
0 (0)

From Hypatia of Alexandria to Jocelyn Bell Burnell, a beguiling homage to the heroines of illuminating the cosmos.

“We reach forth and strain every nerve, but we seize only a bit of the curtain that hides the infinite from us,” astronomer Maria Mitchell observed as she paved the way for women in science. We are sensorial creatures, of course, and however little of the infinite we may seize, we do so through our powers of bodily perception. Squinting into her two-inch telescope to differentiate the colors of the stars, Mitchell marveled in her diary: “There is something of the same pleasure in noticing the hues that there is in looking at a collection of precious stones, or at a flower-garden in autumn. Blue stars I do not yet see, and but little lilac except through the telescope.”

Around the same time, on the other side of the Atlantic, that dreamsome blue — the color of distance and desire — was tinting the world of another remarkable woman working in another branch of science. In 1843, English botanist Anna Atkins became the first female photographer and a pioneer of scientific illustration with her revolutionary cyanotypes of sea algae.

A century and a half later, LA-based artist Lia Halloran serenades the spirit of science-inspired art through this early imaging technique in a poetic project titled Your Body is a Space That Sees — a cyanotype celebration of women in astronomy, whose discoveries and contributions to understanding the universe date back to antiquity yet remain largely obscure.

Drawing on historical images and texts, Halloran, who holds an MFA in painting and printmaking from Yale, pays homage to astronomers ranging from Hypatia of Alexandria to Caroline Herschel (whose nephew John, incidentally, invented the cyanotype mere months before Anna Atkins pioneered its use in scientific illustration) to the team of women “computers” at the Harvard Observatory known as Pickering’s Harem.

From craters to constellations, the images fuse a piercing intensity with an enigmatic subtlety that, like the universe itself, draw us into a beguiling mystery the full meaning of which remains enticingly beyond our reach.

Amplifying the mystery and magic of the final art is the gritty, hands-on nature of Halloran’s process:

More of Halloran’s immensely beautiful and thoughtful work at the intersection of art, science, and human life can be found on her site. Complement this particular project with artist Lauren Redniss’s cyanotype celebration of Marie Curie and trailblazing astronomer Vera Rubin on women in science, dark matter, and our never-ending quest to know the cosmos.

No Thoughts on Your Body is a Space That Sees: Artist Lia Halloran ’s Stunning Cyanotype Tribute to Women in Astronomy – @brainpickings
0 (0)