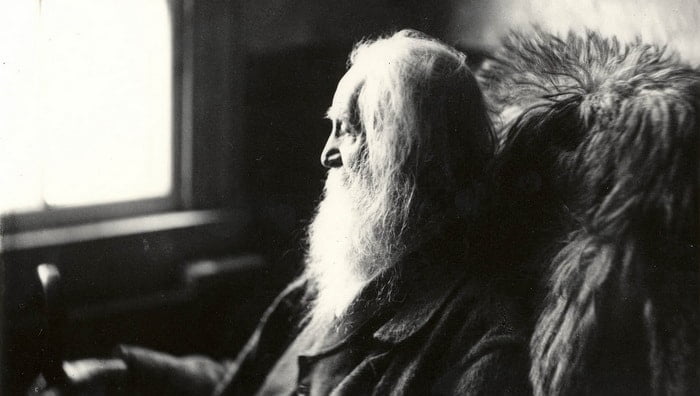 Walt Whitman on Identity and the Paradox of the Self – @Brainpickings.org0 (0)

“There is, in sanest hours, a consciousness, a thought that rises, independent, lifted out from all else, calm, like the stars, shining eternal. This is the thought of identity.”

“Our normal sensation of self is a hoax, or, at best, a temporary role that we are playing, or have been conned into playing,” Alan Watts wrote in his memorable meditation on the ego, the universe, and becoming who you really are. Neuroscientists have concurred with Eastern philosophy and framed the self as a construction of the social brain; developmental psychologists have studied its formation in childhood; cognitive scientists have pinpointed its roots in memory. The question of what the self is and whether it exists at all has bedeviled ancient philosophy and modern psychology with equal ferocity.

And yet, in the privacy of our interior lives, the reality of the self seems inescapable — sometimes maddeningly so. For each of us, the entire enormity of life unfolds within the tiny locus of consciousness we experience as our very own self. So where is the line between the inevitability of the self as a focal point of experience and its mutation into an imprisoning ego-shell which, in the words of the great Zen teacher D.T. Suzuki, “is the hardest thing to outgrow”?

That’s what Walt Whitman (May 31, 1819–March 26, 1892) explores in a passage from this altogether magnificent essay Democratic Vistas — his increasingly timely meditation on a politically healthy society, penned in the late 1860s and included in Walt Whitman: Poetry and Prose (free ebook | public library).

There is, in sanest hours, a consciousness, a thought that rises, independent, lifted out from all else, calm, like the stars, shining eternal. This is the thought of identity — yours for you, whoever you are, as mine for me. Miracle of miracles, beyond statement, most spiritual and vaguest of earth’s dreams, yet hardest basic fact, and only entrance to all facts. In such devout hours, in the midst of the significant wonders of heaven and earth, (significant only because of the Me in the centre,) creeds, conventions, fall away and become of no account before this simple idea. Under the luminousness of real vision, it alone takes possession, takes value. Like the shadowy dwarf in the fable, once liberated and look’d upon, it expands over the whole earth, and spreads to the roof of heaven.

The quality of being, in the object’s self, according to its own central idea and purpose, and of growing therefrom and thereto — not criticism by other standards, and adjustments thereto — is the lesson of Nature.

But, Whitman cautions, we ought to safeguard against letting the transcendence of this natural self harden into the unnatural self-importance of an overactive ego:

True, the full man wisely gathers, culls, absorbs; but if, engaged disproportionately in that, he slights or overlays the precious idiocrasy and special nativity and intention that he is, the man’s self, the main thing, is a failure, however wide his general cultivation.

The best culture will always be that of … courageous instincts, and loving perceptions, and of self-respect.

Complement this particular fragment of Whitman’s timelessly terrific Democratic Vistas with Bruce Lee on self-actualization and the crucial difference between pride and self-esteem and biologist-turned-Buddhist Matthieu Ricard and his philosopher father in conversation about the nature of the self and the true measure of personal strength, then revisit Whitman on the power of music, his prescient reflections onthe need to integrate body and spirit in healthcare, and his abiding advice on living a vibrant and rewarding life.

No Thoughts on Walt Whitman on Identity and the Paradox of the Self – @Brainpickings.org0 (0)