The music of John Williams is as much a part of the Star Wars mythos as lightsabers and the Force. His themes have become not just the soundtrack to the movies of Steven Spielberg and George Lucas, but of Hollywood in general. After six decades of making movie music, Williams is looking forward to continuing his time in a galaxy far, far, away as he plans to write the music for _Star Wars: Episode VIII _(and possibly beyond). However, the reason he wants to continue apparently has less to do with his legacy, and more to do with Daisy Ridley. He doesn’t want anybody else writing her music.

On June 9, John Williams became the first composer to win the lifetime achievement award from the American Film Institute. As part of a retrospective of that lifetime of work, Williams was asked about his plans for the future by Variety. He told them that he plans to do the music for Star Wars: Episode VIII, but, apparently, only because he wants to be the only one who gets to write music for Daisy Ridley.

If I can do it, I certainly will. I told Kathy Kennedy I’m happy to do it, but the real reason is, I didn’t want anybody else writing music for Daisy Ridley.

We can’t say we blame John Williams if he’s slightly enamored with Daisy Ridley. That’s pretty much what happened to the rest of the world when we saw Star Wars: The Force Awakens for the first time. While there’s plenty of love for all of the new trio of heroes from The Force Awakens, Rey was by far the most adored of the team. And for what it’s worth, Williams wrote some great music for the actress. Go back and listen to “Rey’s Theme” or “The Girl with the Staff” from the film’s soundtrack. There’s some quality work there. When done right and John Williams is the master, music is a big part of what helps get an emotional response from the audience. His music is a big part of the reason we all love Rey right now. 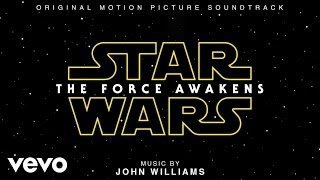 John Williams is, of course, joking, at least a little bit. We have to assume that he feels some sort of ownership of Star Wars music at this point. While he’s been the composer of every chapter of the Star Wars saga to date, at some point the baton will need to be handed off. Disney plans to continue making Star Wars movies in perpetuity at this point, so Williams won’t be able to do them all. Hopefully, he’ll at least be able to finish off the current trilogy.

John Williams has already taken the first step in that regard, as he won’t be the composer for Rogue One: A Star Wars Story, although, there have reportedly been some issues behind the scenes as far as that job goes, so it’s possible Lucasfilm wishes he was the one doing it. We know we do.