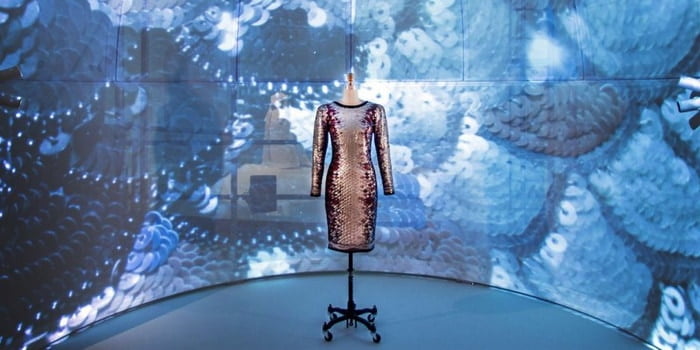 The Evolution of Dressmaking, from Hand- to Machine-Made – @Hyperallergic0 (0) A clever way of telling if a piece of clothing is a knock-off is to look at the stitching: if it’s crooked, it’s probably been hastily assembled in some sweatshop; if it’s straight, it’s been meticulously formed with the utmost sensitivity to detail in an atelier. Construction in fashion is a sign of quality, one that contributes to a fashion item’s sense of status, and it’s the theme explored in the Metropolitan Museum of Art’s spring costume exhibition, Manus x Machina. The extravagant and lavish exhibition is probably the most beautiful the Met has mounted since Alexander McQueen: Savage Beauty. Theme aside, the basilican design and atmosphere of the space, coupled with resplendent ensembles from some of the gods of the fashion world, turn a visit to the museum into a religious experience. We’re welcomed into the exhibition with a wedding dress by Karl Lagerfeld, the meters-long train unfurling towards us in an austere atrium, striking the viewer with a perfectly symmetrical tableau. It’s only upon further inspection that we see the handiwork in the gown, a baroque pattern first sketched by hand, then manipulated by computers to pixelate the design. It was then embellished with both hand-sewn pearls and gemstones and machine-printed rhinestones, perfectly encapsulating the tension between man and machine.

Apple’s sponsorship of the show and the fact that its chief design officer, Jonathan Ive, co-chaired the Met Gala, does lend a “smart clothing” theme to Manus x Machina. However, on the whole, the show is more analogue. Sure there are 3D-printed ensembles, but the focus is literally embodied by the title, displaying the range of construction techniques from the rise of haute couture in the 19th century to the present; from the handmade to the use of various machines.

For the catalyst of the exhibition, curator Andrew Bolton took a page from Diderot’s Encyclopédie, a general French encyclopedia from the 18th century, and one of the first texts to elevate tailoring to the likes of science and arts. Bolton organized the show around different métiers in sewing and tailoring, from embroidery to featherwork to beading, and even deconstruction, illustrating the paradox of seeing a dress intentionally built to look like it’s falling apart. Maiko Takeda’s urchin-like headpieces resemble robotic approximations of sea creatures, deliciously “hi-tech” looking, but made from low-tech materials. A Christopher Kane dress, decorated with diagrams from a botany textbook, contains aspects of a blueprint, the seed that engenders a final product. John Galliano’s “Creation” dress, a gown of satin, tulle, padding, and style tape, shows how haute couture is built.

Amidst these gems (and many more), however, the show repeats similar designs and designers a bit too often. Though it is expected to heavily represent architects of fashion like Iris van Herpen and Issey Miyake in a show dedicated to cutting-edge construction techniques, the overreliance on them made the show less intriguing as it went on. The show provides a comprehensive historical survey of the evolution of dressmaking, but also highlights the theoretical implications of production and reproduction. Bolton name checks Neo-Marxist philosopher Walter Benjamin in the show’s catalogue, applying theories from his The Work of Art in the Age of Mechanical Reproduction to the fashion world. What Benjamin said contained the “aura” — the mark of individuality and specialness only an original, handmade work can imbue — Bolton likened to haute couture, whilst assembly-line fashion (as reproductions of art) lacks that aura.

While the show stresses how the handmade is typically viewed as superior to the machine — displaying exquisite samples of hand-sewn haute couture, from Yves Saint Laurent’s feather evening dress to the precise embroidery of a Christian Dior ball gown — it goes to great lengths to showcase the splendor of machine-made garments. Iris van Herpen’s skeleton dress, a 3D-printed ribcage, hovers on display, showing the intricacies of a design so precise it would be nearly impossible to make by hand. And while being new, the garment echoes the history of fashion, namely, in this case, Elsa Schiaparelli’s own hand-sewn skeleton dress. Though out of place at the Met, it would have been interesting to fold in thoughts on the means of production, to give credit to premières (head seamstresses) in ateliers, as well as understand the exploitation that occurs across the world in the name of fast fashion. The show explored construction in a theoretical sense, not a practical one. Negative implications and realities were wiped clean, but then again, that’s how you make something beautiful.

No Thoughts on The Evolution of Dressmaking, from Hand- to Machine-Made – @Hyperallergic0 (0)