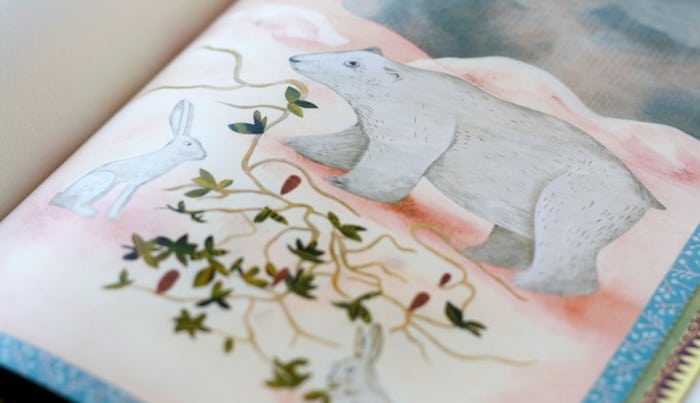 From the cocoa tree that gives us chocolate to the Philippines’ rainbow tree, a global tour of rooted marvels.

Hermann Hesse called trees “the most penetrating of preachers.” Three centuries earlier, a forgotten English gardener asserted that they “speak to the mind, and tell us many things, and teach us many good lessons.”

Perhaps because trees are the oldest living things in the world, they have permeated our ancient mythology and our scientific sensemaking. More than a beautiful metaphor for life and death, trees have even saved our lives and, in inspired moments, we have saved theirs.

In Strange Trees and the Stories Behind Them (public library), French author Bernadette Pourquié and illustrator Cécile Gambini choreograph an illustrated tour of the world’s greatest arboreal wonders, from species that have witnessed the dinosaurs roam this Earth to exotic marvels like Brazil’s “Walking Tree” (Red Mangrove) and the Philippines’ “Rainbow Tree” (Mindanao gum tree) to underappreciated procurers of human delights, such as the sapodilla tree that gives us chewing gum and the cocoa tree without which there would be no chocolate.

Alongside each imaginative illustration, partway between botany and fairy tale, is a one-page autobiography of the respective tree, describing its natural and cultural habitat in a short first-person story fusing curious science facts, history, and local customs.

Don’t worry about getting bonked on the bean with a pod: cocoa trees don’t lose their seed pods, even when ripe. They dry up, unless, of course, a hungry parrot happens by.

I hope you didn’t forget your adventurer’s cooking kit: a club, a banana tree leaf, an oven, some rocks, and a healthy dose of patience.

Smash three pods with your club and save one hundred seeds to make about four ounces of chocolate. Let them ferment for a week, and a white pulp will seep out. Next, let them dry on a banana tree leaf for two weeks, stirring them frequently: you’ll get brown cocoa “beans.” Now break open their shells, wash them, and roast them for twenty to thirty minutes at 215 to 285 degrees Fahrenheit. Then crush them over heat with rocks. Now you have “cocoa paste,” from which you can make chocolate.

Complement the wonderful Strange Trees with this photographic tour of the world’s oldest living trees, the heartening story of how Marianne Moore saved a majestic elm with a poem, and the philosophical and uncommonly poetic Japanese pop-up book Little Tree.

No Thoughts on Strange Trees: An Illustrated Atlas of the World’s Arboreal Wonders – @Brainpickings
0 (0)