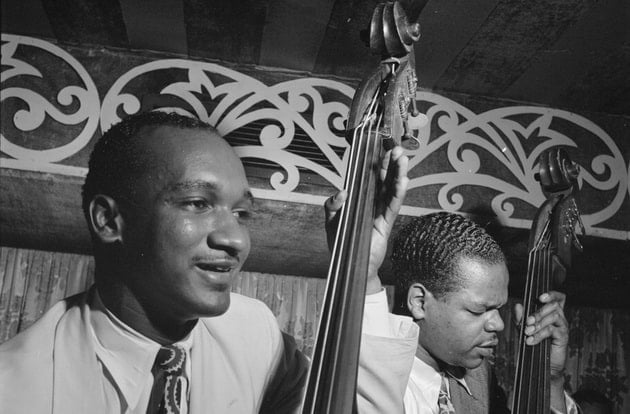 If anyone should doubt how much it has meant to the Danes that a number of prominent American jazz musicians have lived in Denmark for a shorter or longer time, they just need to walk around the streets of Copenhagen. Here you will find street names such as Ben Webster Street, Ernie Wilkins Street and Kenny Drew Street.
Another jazz street is named after bassist Oscar Pettiford. Pettiford, along with Swedish pianist Jan Johansson, is the subject of a wonderful new anthology called In Denmark 1959- 1969 with recordings from 1959-1960 that find the two elegant musicians alone or together in different constellations with American and Danish jazz musicians.

The album consists of recordings from seven different occasions. The big scoop is three recordings with saxophonist Stan Getz, Johansson, Pettiford and drummer Joe Harris. Originally, Johansson was not supposed to play with Getz, but French pianist René Utreger could not do the gig and so Johansson was called instead.

The Danish filmmaker, poet, and then jazz writer, Jørgen Leth, covered the event extensively in the Danish newspaper Aktuelt and made interviews with both Harris, Getz and Johansson. Johansson was thrilled to play with Pettiford and Getz, as he reveals in Leth’s article from November 6, 1959:

“Stan and Oscar are so helpful, and they are simply wonderful to play with. More inspiring than any other musicians I know. It is a very big experience to me. Just to play accompaniment with Oscar…oh, he is absolutely fantastic. When you play with him, you know exactly where the rhythmical accents are, it is an amazing feeling. You dare to do more.”

The quartet is captured in a concert recording from Tivoli Gardens in Copenhagen and Pettiford’s “La Verne Walk” opens with a solo from Pettiford before Getz enters with his liquid sound and gentle honks while Johansson’s playing is light as a summer night and Harris keeps the rhythm flowing with brushes. The reading of Benny Golson‘s “I Remember Clifford” is a ballad as only Getz can play it, incredibly light and tender, with Pettiford adding subtle nuances of bowed bass. Coleman Hawkins‘ “Stuffy,” on the other hand, shows the group in swinging style. Three tracks of this music whets the appetite for more.

Fortunately, there are other treasures to be found in the anthology, including recordings with Pettiford as a featured soloist, a vocal track with singer Lee Gaines and precious miniature solo recordings of Johansson getting a first grasp at what would later be his iconic reading of Swedish folk songs on his classic album Jazz På Svenska (1964). There is also a welcome opportunity to hear the highly talented Danish vibraphonist Louis Hjulmand in his group with Johansson, Pettiford and drummer William Schiøppfe.

The anthology has been expertly compiled by Danish jazz musician, writer and broadcaster, Ole Matthiessen, and engineer Jørgen Vad has done a good job with the sound that is mostly clear and warm. Add to this superb photos by photographer Jan Persson and informative and entertaining notes by Matthiessen and Jørgen Siegumfeldt and the result is an album that is among this year’s best historical releases.