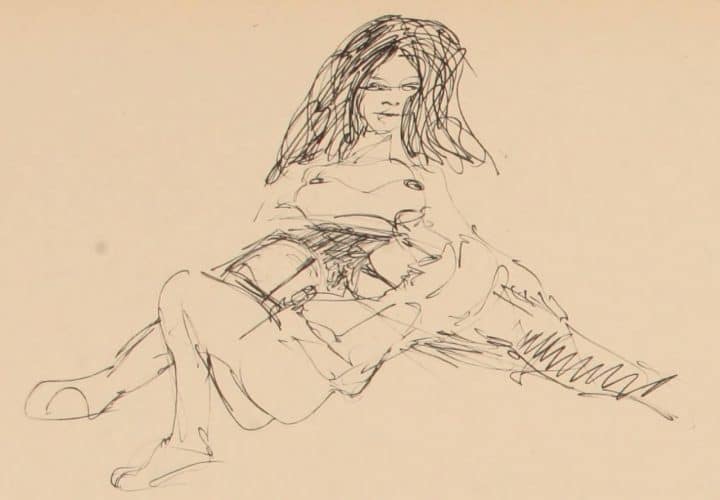 In 1970 Eugene Schuster’s London Arts Gallery on New Bond Street in salubrious Mayfair was raided by the Obscene Publications Squad, known to many at the time as the ‘Dirty Squad’. The gallery was ‘asked’ to close down immediately and Schuster was soon charged under the Obscene Publications Act. The exhibition had only been open for two days but the gallery had been showing The Bag One exhibition – fourteen intimate and erotic lithographs by John Lennon that depicted himself and his wife, Yoko Ono, in various sexual poses. Each lithograph was for sale for £40 each or £550 for the set which included an extremely handy leather hold-all to keep them in. Bag One by John Lennon John Lennon lithograph of Yoko shown at the Bag One exhibition at the London Arts Gallery in Mayfair. With publication of the erotic lithographs on the next five pages, John Lennon, master musician, promoter of peace, and one of the Now Generation’s most inspiring and kaleidoscopic figures, reveals still another of his talents: that of an artist. Avant-Garde is pleased to present this portfolio of lithographs in whcih John celebrates his love for Yoko Ono. Most of the famous couples of history – Elizabeth Barrett and Robert Browning, the Duke and Duchess of Windsor, Pat and Dick Nixon – have left it to our imaginations to envision them joined in the act of love. But here, for the first time, a pair of famous lovers actually shows us how they express their love for one another. The erotic lithographs reproduced here are part of a larger set of fourteen that John has created and that are now being sold, in a limited edition of 300, by art galleries in New York, London, Paris and San Francisco. The sets are priced at $1,000 each. John has also designed a magnificent white  Italian leather carrying bag for each set. His title for the whole package is “Bag One” and he promises that other sets of lithos will follow. It seems as though John Lennon really is into a new bag. Soon after the forced closure of the London Arts Gallery the Director of Public Prosecutions received a letter from a member of the public, a Mr P.F.C. Fuller esq. The missive warned that if the court case went ahead there was a chance other art collections throughout the country could potentially be in trouble. Including, he suggested, even the Queen’s. Fuller wrote:

The DPP, presumably, decided that the Queen’s art collection was not at risk from the Dirty Squad and the case went to court in April 1970 – a month after the publication of the Avant-Garde magazine in New York. The summons, using a law that was 160 years old, alleged that the gallery had:

exhibited to public view eight indecent prints to the annoyance of passengers, contrary to Section 54(12) of the Metropolitan Police Act, 1839.

It was an odd law and the warrant had originally been issued under the Obscene Publications Act, but at a later date it was decided to proceed under the Act of 1839 which meant that the plea of artistic merit or public interest could not be used. The defence concentrated on the word ‘annoyance’ arguing that it was an integral part of the offence and Detective-Inspector Patrick Luff, of New Scotland Yard told the magistrate that when he went to the gallery on January 15 about forty people were viewing the prints:

I saw no display of annoyance from the younger age group, but one gentleman was clearly annoyed.

Mr. St. John Harmsworth, the magistrate, asked the Detective-Inspector: “Did he stamp his foot?” To which Luff confidentaly replied, “anger was definitely registered on his face!”

The Guardian reported that at one point in the trial a prosecution witness, a grey-haired accountant from Wandsworth Common had:

felt a bit sick that a man should draw himself and his wife in such positions.” It had been a shock, he said, to see a picture of “Yoko in the nude with rather exaggerated bosom with apparently somebody sucking a nipple.

Amidst much laughter in court the case was dismissed with the magistrate deciding that anyway there are no passengers in a gallery – “they have, for the time being, finished passaging” and thus Lennon’s prints were “unlikely to deprave or corrupt.”

The last issue of Avant-Garde magazine came out in the summer of 1971. Here are some amusing adverts featured in issue #11 (March 1970). “The Hip Boot is made from the finest Testa de Moro suede and comes in shades of Malibu Sand, Panther Black, and Earth Brown. You’ll look so cool that every guy in town will wish he were in your boots.” The Avant-Garde Stash Bag – “If you a knowledgeable head, this is your bag”