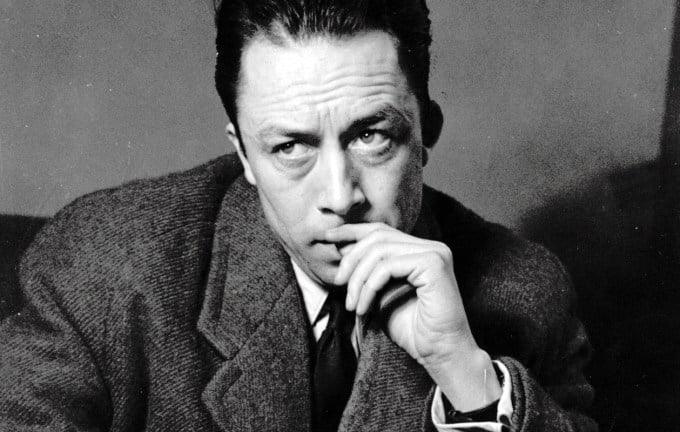 “Real generosity toward the future lies in giving all to the present.”

“You say you want a revolution,” the Beatles sang in 1968 as Dr. Martin Luther King, Jr. was erecting the pillars of nonviolence on the other side of the Atlantic, “Well, you know / We all want to change the world… But when you talk about destruction / Don’t you know that you can count me out… If you want money for people with minds that hate / All I can tell you is brother you have to wait.”

Perhaps such is the curse of our species: Only in violent times do we remember, in our bones and our sinews, that hate is not a weapon of rebellion but of cowardice; that no true revolution is achieved through destruction and nihilism; that the only way to change the world is through constructive and life-affirming action. No one has made this point more persuasively and elegantly than Albert Camus (November 7, 1913–January 4, 1960) in his sublime and sublimely timely 1951 book The Rebel: An Essay on Man in Revolt (public library).

Six years before he became the second-youngest person to receive the Nobel Prize, 38-year-old Camus writes:

What is a rebel? A man* who says no, but whose refusal does not imply a renunciation. He is also a man who says yes, from the moment he makes his first gesture of rebellion.

Rebellion cannot exist without the feeling that, somewhere and somehow, one is right… The rebel … says yes and no simultaneously… In every act of rebellion, the rebel simultaneously experiences a feeling of revulsion at the infringement of his rights and a complete and spontaneous loyalty to certain aspects of himself.

* Let not the gendered language detract or distract from the lucidity of Camus’s wisdom, for it is a function of his era — something on which Ursula K. Le Guin has commented brilliantly.

Nearly two decades after his assertion that “there is no love of life without despair of life,” Camus adds:

Despair, like the absurd, has opinions and desires about everything in general and nothing in particular. Silence expresses this attitude very well. But from the moment that the rebel finds his voice — even though he says nothing but “no” — he begins to desire and to judge… Not every value entails rebellion, but every act of rebellion tacitly invokes a value… Awareness, no matter how confused it may be, develops from every act of rebellion: the sudden, dazzling perception that there is something in man with which he can identify himself, even if only for a moment.

Why rebel if there is nothing permanent in oneself worth preserving?

And yet true rebellion, Camus argues, is an act motivated by concerned with the common good rather than by self-interest:

The affirmation implicit in every act of rebellion is extended to something that transcends the individual in so far as it withdraws him from his supposed solitude and provides him with a reason to act.

An act of rebellion is not, essentially, an egoistic act. Of course, it can have egoistic motives… The rebel … demands respect for himself, of course, but only in so far as he identifies himself with a natural community.

When he rebels, a man identifies himself with other men and so surpasses himself, and from this point of view human solidarity is metaphysical.

With an eye to the osmotic relationship between construction and destruction, Camus adds:

Rebellion, though apparently negative, since it creates nothing, is profoundly positive in that it reveals the part of man which must always be defended.

While this essay is a particularly spirited expression of his lifelong mission to defeat nihilism, Camus uses the writings of Nietzsche — who proclaimed himself “the first perfect nihilist of Europe” — as a springboard for exploring the constructive potentiality of rebellion. He writes:

Because his mind was free, Nietzsche knew that freedom of the mind is not a comfort, but an achievement to which one aspires and at long last obtains after an exhausting struggle. He knew that in wanting to consider oneself above the law, there is a great risk of finding oneself beneath the law. That is why he understood that only the mind found its real emancipation in the acceptance of new obligations. The essence of his discovery consists in saying that if the eternal law is not freedom, the absence of law is still less so.

The sum total of every possibility does not amount to liberty… Chaos is also a form of servitude. Freedom exists only in a world where what is possible is defined at the same time as what is not possible. Without law there is no freedom.

Building on Nietzsche’s ideas about the fine line between constructive and destructive rebellion — ideas Camus sees as “born of abundance and fullness of spirit” — he summarizes this orientation of mind:

One must accept the unacceptable and hold to the untenable… From absolute despair will spring infinite joy, from blind servitude, unbounded freedom. To be free is, precisely, to abolish ends. The innocence of the ceaseless change of things, as soon as one consents to it, represents the maximum liberty. The free mind willingly accepts what is necessary. Nietzsche’s most profound concept is that the necessity of phenomena, if it is absolute, without rifts, does not imply any kind of restraint. Total acceptance of total necessity is his paradoxical definition of freedom. The question “free of what?” is thus replaced by “free for what?” Liberty coincides with heroism. It is the asceticism of the great man, “the bow bent to the breaking-point.”

In a passage of remarkable resonance today, when we are confronting a wave of violence so strangely divorced from everything the past has taught us — those countless bloody lessons in the perennial fact that violence is always without victors — Camus considers the only adequate role of history:

History … is only an opportunity that must be rendered fruitful by a vigilant rebellion.

More than half a century before Rebecca Solnit’s electrifying case for the vital difference between blind optimism and hope as an act of rebellion, Camus writes:

The words that reverberate for us at the confines of this long adventure of rebellion are not formulas for optimism, for which we have no possible use in the extremities of our unhappiness, but words of courage and intelligence which, on the shores of the eternal seas, even have the qualities of virtue.

No possible form of wisdom today can claim to give more. Rebellion indefatigably confronts evil, from which it can only derive a new impetus. Man can master in himself everything that should be mastered. He should rectify in creation everything that can be rectified. And after he has done so, children will still die unjustly even in a perfect society. Even by his greatest effort man can only propose to diminish arithmetically the sufferings of the world. But the injustice and the suffering of the world will remain and, no matter how limited they are, they will not cease to be an outrage. Dimitri Karamazov’s cry of “Why?” will continue to resound; art and rebellion will die only with the last man.

Then we understand that rebellion cannot exist without a strange form of love. Those who find no rest in God or in history are condemned to live for those who, like themselves, cannot live: in fact, for the humiliated. The most pure form of the movement of rebellion is thus crowned with the heart-rending cry of Karamazov: if all are not saved, what good is the salvation of one only?

It is out of this understanding of rebellion as salvation for all that the most courageous acts of solidarity are born. One is reminded of Simone Weil, whom Camus lauded as “the only great spirit of our times” and who, as she lay dying of tuberculosis, defied her doctors’ orders by refusing to eat more than the rations her compatriots in Nazi-occupied France were given. Invoking such heroes, Camus writes:

This insane generosity is the generosity of rebellion, which unhesitatingly gives the strength of its love and without a moment’s delay refuses injustice. Its merit lies in making no calculations, distributing everything it possesses to life and to living men. It is thus that it is prodigal in its gifts to men to come. Real generosity toward the future lies in giving all to the present.

Rebellion proves in this way that it is the very movement of life and that it cannot be denied without renouncing life. Its purest outburst, on each occasion, gives birth to existence. Thus it is love and fecundity or it is nothing at all. At the end of this tunnel of darkness, however, there is inevitably a light, which we already divine and for which we only have to fight to ensure its coming. All of us, among the ruins, are preparing a renaissance beyond the limits of nihilism. But few of us know it.

In a sentiment of especial poignancy today, as Europe struggles to welcome the world’s refugees and displaced families so ungenerously referred to as a “crisis,” Camus adds:

In the light, the earth remains our first and our last love. Our brothers are breathing under the same sky as we; justice is a living thing. Now is born that strange joy which helps one live and die… With this joy, through long struggle, we shall remake the soul of our time, and a Europe which will exclude nothing.

The Rebel is a magnificent and acutely timely read in its totality. Complement it with Susan Sontag on courage and resistance and Nietzsche on what it really means to be a free spirit, then revisit Camus on strength of character, happiness, unhappiness, and our self-imposed prisons, the art of awareness, and the touching letter of gratitude he sent to his childhood teacher shortly after winning the Nobel Prize.