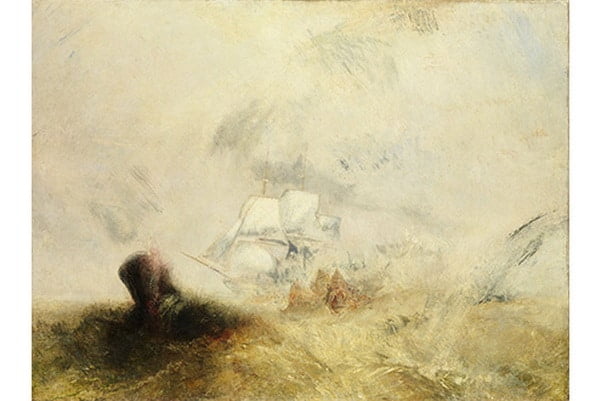 ‘Turner’s Whaling Pictures’, on view at The Metropolitan Museum of Art, is the first exhibition to unite the series of four whaling scenes painted by Joseph Mallord William Turner (1775–1851) near the end of his career. May 10 – August 7, 2016.

Source: The Metropolitan Museum of Art

The quartet of paintings— comprising The Met’s Whalers (ca. 1845) and its three companions from Tate Britain—were among the last seascapes exhibited by Turner, for whom marine subjects were a creative mainstay. The topic of whaling resonated with some of Turner’s favorite themes: modern maritime labor, Britain’s global naval empire, human ambition and frailty, and the awe-inspiring power of nature termed the Sublime.

Shown in pairs at the Royal Academy in London in 1845 and 1846, the whaling canvases confounded critics with their “tumultuous surges” of brushwork and color, which threatened to obscure the motif; yet the pictures earned admiration for the brilliance and vitality of their overall effects. “Turner’s Whaling Pictures” will offer a unique opportunity to consider the paintings as an ensemble and to contemplate their legacy, including their possible impact on Herman Melville’s epic novel “Moby–Dick”, published months before Turner’s death in 1851. It is not certain that Melville saw the paintings when he first visited London in 1849, but he was unquestionably aware of them. Aspects of Melville’s novel are strikingly evocative of Turner’s style.

In addition to the four paintings that will be on view, a selection of related watercolors, prints, books, and wall quotes will also be displayed and will offer insight into Turner’s paintings and their possible relationship with Melville’s text. A whaling harpoon, on loan from the South Street Seaport Museum, and whale oil lamps from The Met’s collection will also be on view. This focus exhibition will allow viewers to engage closely with the output of these two great 19th–century artists, and to assess for themselves whether the British painter inspired one of the crowning achievements of American literature.

“Turner’s Whaling Pictures” is organized by Alison Hokanson, Assistant Curator, and Katharine Baetjer, Curator, both of the Metropolitan Museum’s Department of European Paintings.

The post: Turner’s Whaling Pictures at the Metropolitan Museum, was published at: The ArtWolf