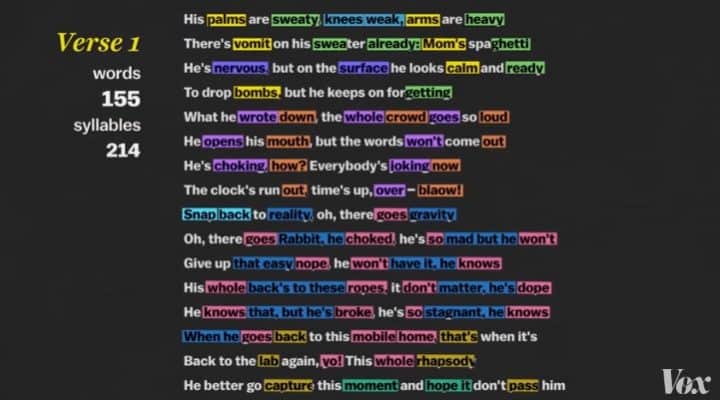 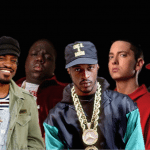 What makes lyricists like Rakim, MF DOOM, Notorious B.I.G. and others stand out? For Heads, reasons can vary but it’s a generally accepted tenet that what makes them and others so great at what they do is their ability to play with language – not just in terms of rhyming patterns, but also in the manipulation of syllables, time, and speed. For many, simply listening to the work of gifted lyricists is enough to convey the complexity and ingenuity of lyrical deftness, but sometimes a visual guide can really bring forth just how ill some rappers’ skills are, particularly with the ever-so-handy online video tool at our hands.

With that in mind, Vox.com recently published “Rapping, deconstructed: the best rhymers of all time,” a nearly 13-minute long video project which analyzes the lyrical content of Hip-Hop’s most inventive and influential rhymers, from the God MC to Kendrick Lamar. Presented as an academic undertaking – which it certainly is – it’s the work of Estelle Caswell, who includes not only the commentary from artists, but also the contributions of music theorist Martin Connor. While the content of the lyrics themselves and even their inventive nature are already familiar to most Hip-Hop listeners, the exceptionally detailed and nearly scientific dissection of lyrics, phrasing, syncopation, and other qualities make this one of the most engaging studies of the genius we call lyricism.

Through clips of music and the easy-to-follow presentation of words on screen, Caswell’s project brings to life the words of Kurtis Blow’s “The Breaks,” Eric B. Rakim’s “Eric B. Is President,” Biggie’s “Hypnotize,” Black Star’s “RE:DEFinition” (which she erroneously narrates is from 2002, when it is in fact from 1998), Oukast’s “Aquemini,” Eminem’s “Business” and “Lose Yourself,” and Kendrick Lamar’s “Rigamortis.” However, the artist to bookend the video is MF DOOM, whose lyrics on “That’s That,” “Great Day,” and “Meat Grinder” serve as case studies, with Open Mike Eagle sharing his reflections on what makes the masked MC so untouchable. 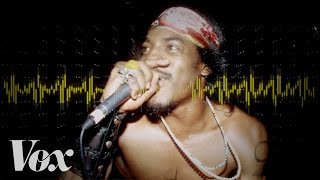 AABB, internal and multi-syllabic rhymes are all explored in this densely packed mini-documentary as are techniques like crossing the bar line, motives, holorime, double entendres and more. Whose bars should be analyzed next?

O artigo: The Flows of the Best MCs in the World Are Dissected…Brilliantly (Video), foi publicado em: AFH Ambrosia for Heads

The post: The Flows of the Best MCs in the World Are Dissected…Brilliantly (Video), was published at: AFH Ambrosia for Heads