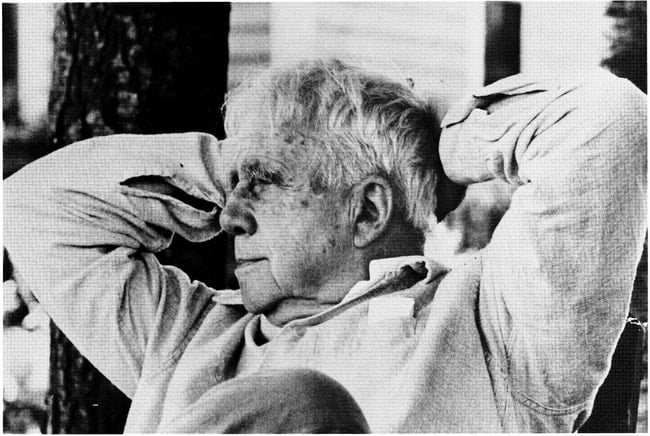 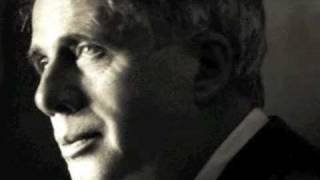 Robert Frost has the dubious honor of being known the world over as the poet of a seize-the-day cliché. His poem “The Road Not Taken” (read by Frost above) appears on coffee mugs, autumnal motivational posters, upbeat email signatures, and in advertisements and television shows, all meant to inspire confident decision-making in uncertain times: unintentionally ironic, populist appeals to diverge from the herd.

If this is Frost’s legacy in the wider culture, it’s a fate most poets wouldn’t wish on their bitterest rival. The typical interpretation of this poem is an unfortunate misrepresentation of Frost’s work in general. Indeed, “The Road Not Taken” may be “the most misread poem in America,” as David Orr argues at The Paris Review.

Frost’s poetry does not often inspire confidence or motivation, but rather doubt, uncomfortable reflection, fear, and sometimes a kind of dreadful awe. Like Faulkner was in his day, Frost was, and still is, mistaken for a quaint, colorful regionalist. But rather than a poet of New England folk simplicity, he is a poet of New England skepticism and a kind of hard-headed sublime. Anyone who reads “The Road Not Taken” closely, for example, will note the speaker’s ambiguous tone in the final stanza, and final three lines—oft-quoted as a triumphant dénouement.

I shall be telling this with a sigh
Somewhere ages and ages hence:
Two roads diverged in a wood, and I—
I took the one less traveled by,
And that has made all the difference.

The traveler does not tell us what “difference” the choice will have made, nor why he should tell of this crossroads “ages and ages hence… with a sigh.” Implied in these lines, however, is at least the suggestion of unavoidable future regret, and a reckoning with irrevocable fate. The earlier line, “Oh, I kept the first for another day!” sounds more like an exclamation of rue than the celebration of a choice well-made.

And as Orr points out, the speaker’s initial encounter presents him with two paths that “equally lay / in leaves.”; the two roads are equally travelled—or untravelled as the case may be—and the traveller chooses one arbitrarily. In these final lines, he announces his intention to tell a different, perhaps self-congratulatory story about his decision. “The poem isn’t a salute to can-do individualism,” Orr writes, “it’s a commentary on the self-deception we practice when constructing the story of our own lives.”

One can hear even darker notes in another famous poem, “Mending Wall,” in which a nameless, unfeeling “Something” goes about its work of dismantling the speaker’s best efforts, and all human work generally. It’s a theme in much of Frost’s poetry that can, if fully appreciated, inspire a dread as potent as that in the most baroque and florid of H.P. Lovecraft’s weird tales. Frost developed his theme of cosmic indifference early, in “Stars,” from his first published collection, A Boy’s Will. He introduces the poem in the table of contents with this succinct description: “There is no oversight in human affairs,” a matter-of-fact statement that scarcely prepares us for the unnerving images to follow:

How countlessly they congregate
O’er our tumultuous snow,
Which flows in shapes as tall as trees
When wintry winds do blow!—

As if with keenness for our fate,
Our faltering few steps on
To white rest, and a place of rest
Invisible at dawn,—

And yet with neither love nor hate,
Those stars like some snow-white
Minerva’s snow-white marble eyes
Without the gift of sight.

In three short, devastating stanzas, Frost undercuts ancient, comforting pretentions about the stars’ (or gods’) sentient benevolence, with images and diction that recall Thomas Hardy’s bleak lament “In Tenebris” and anticipate Wallace Stevens’ impersonal and chilling “The Snow Man.” The snow and ice in Frost’s poems are not part of the pretty scenery, but metonymic figures of oblivion.

In short, the kindly old Robert Frost we think we know from the trivial misreading of “The Road Not Taken” is not the poet Robert Frost at all. Frost is a prickly, challenging, even somewhat devious character whose pleasingly musical lines and quaint, pastoral images lure readers into poems that harbor much less cheerful attitudes than they expect to find, and much more complex and mature ideas. The young Frost once described himself as “not undesigning,” and in his later, 1939 essay “The Figure a Poem Makes,” he famously declared that a poem “begins in delight and ends in wisdom.”

In the two Spotify playlists above (download Spotify’s free software here), you can hear Frost read some of his most famous poems, including “The Road Not Taken,” “Mending Wall,” “Nothing Gold Can Stay,” “After Apple Picking,” “Death of a Hired Man,” and several more. Not represented here, unfortunately, are poems from the wonderful debut A Boy’s Will, but you can read that full collection online here, and you should. Get to know the real Frost, if you haven’t already, and you’ll appreciate all the more why he’s one of the most celebrated poets in the American canon.

The readings above will be added to our collection, 700 Free Audio Books: Download Great Books for Free.

The post: Hear Robert Frost Read His Most Famous Poems: “The Road Not Taken,” “Mending Wall,” “Nothing Gold Can Stay” & More, was published at: Open Culture