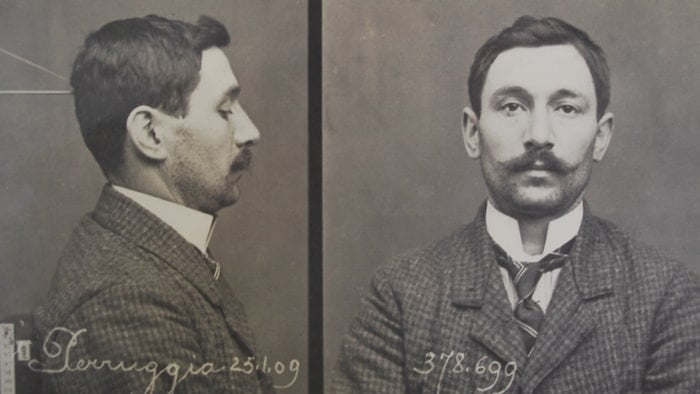 The Mona Lisa has been the subject of many art crimes, but none have been as major as when Vincenzo Peruggia stole it in 1911. Below is ARTnews coverage of the theft from 1911, when the painting was stolen, and 1913, when it was recovered in Italy. Note: errors in punctuation and spelling from the original version of this article have been preserved. For more coverage of art crimes from the ARTnews archive, click here.

“Paris Letter”
September 16, 1911 Paris, Sept. 6, 1911 The interest of the art world and especially in France, is centered in the loss of the “Mona Lisa,” and the Government has been aroused to take prompt action. M. Homelle, director of the national museums, has been removed from his office, and M. Pujalet, who was formerly chief of the cabinet of the Prefect of Police, has been appointed, provisionally to fill his place. He has been instructed to reorganize the administration of the Louvre. Further measures have been taken with a view of placing the national palaces and museums of France under the control of the department of Inspection and Finances. The investigation proved that several guardians of the Louvre have been guilty of negligence in the discharge of their duties and they will be brought before a disciplinary board and punished.…There is a story in circulation that the Duchess de Torlonia, who is the daughter of Mr. and Mrs. Charles Moore, of New York, is also the owner of a Mona Lisa, which she claims has been in the Torlonia family since Da Vinci painted the painted the “Last Supper.” This makes the fifth Mona Lisa said to be in existence.

The long anticipated recovery of the now most famous painting in the world, which occurred just after the ART NEWS had gone to press last week, has naturally been the theme of countless stories in the press, the civilized world over.As had been surmised, the theft was accomplished by the Italian workman, Vincenzo Perugia, with comparative ease, and the picture was as easily concealed by him and transported to Italy. Greed, as always, led finally to the capture and recovery of the treasure.The attributing of motives for the theft, ever since the arrest of Perugia in Florence last week, has been the delight of writers for continents. The “desire to revenge Napoleon’s looting of Italian art treasures from Italy,” “love for painting itself,” etc., etc., have with a hundred other motives been given as Perugia’s inspiration, but the transaction would have been simply a plain “steal.”Exhibited in the Uffizi Gallery in Florence the picture had been viewed by thousands whose eagerness to behold the familiar features of “La Gioconda” almost led to a riot the first day she was placed on view and it is now reported that Da Vinci’s heroine will be taken to Rome for exhibition there, before her return to her home in the Louvre. What will be the scenes in Paris when La Gioconda again fills her place of many years in the Louvre?Is it not all a fascinating, extraordinary story in these latter and unromantic days?