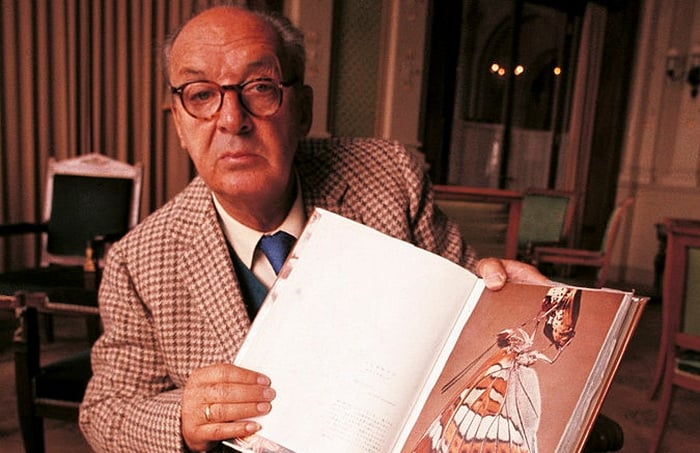 Soon after Vladimir Nabokov arrived in the United States in 1940, he secured a job at the Museum of Natural History studying insects. His job entailed arduous, 14-hour days craning over microscopes and sketches of butterfly anatomy. The work strained his eyes and tormented his vertebrae, but it was a labor of passion. “The pleasure and rewards of literary inspiration,” he said in an interview, “are nothing beside the rapture of discovering a new organ under the microscope or an undescribed species on a mountainside in Iran or Peru.”

The trouble with quoting Nabokov, though, is that one never feels very comfortable believing him. On the matter of literature versus lepidoptery, he is not beyond a reversal of his preferences, in another instance claiming that “The miniature hooks of a male butterfly are nothing in comparison to the eagle claws of literature which tear at me day and night.” These two opinions may fall just short of contradiction; but they remind us how difficult it is to pin down the wings of one of modern literature’s eminently defiant personalities.These differing perspectives (and more) are collected in a new book, Fine Lines, which examines Nabokov’s work as a lepidopterist. The volume publishes 148 of the author’s original butterfly illustrations (only a handful have been released before), accompanied by essays and analysis by experts in the field.Ultimately, Fine Lines illustrates Nabokov’s sophisticated power of observation. It is a talent known to anyone familiar with the author’s lucid prose, which we may now see extended to his drawings and scientific inferences. While visual sharpness does not always go hand in hand with dexterity, the author possesses both. Among his most arresting illustrations of butterflies are those found in the inscription copies given to his wife, Véra. Here, the drawings are meticulously colored, crafted to be beautiful, and betray the sensitivity of an attentive scientist.Yet the majority of the drawings were made to satisfy Nabokov’s utilitarian and taxonomic aims. While other scientists in his field were seduced by maculation—that is, the study of wing patterns—the novelist was clever to look elsewhere. Genitalia, Nabokov found, embodied variations more suited to analysis than the deceptive powdering worn on the wings.Nabokov’s ingenious methods reveal a dedicated observer. In one lab practice, Nabokov would remove the male genitalia, coat them in glycerin, and suspend them in a vial of alcohol and water. Looking into these glowing containers, biographer Brian Boyd notes, “enabled him to turn the organs around under the microscope to obtain a three-dimensional view impossible on a conventional microscope slide.”The illustrations Nabokov produced from these sessions are, to the layman, a dizzying sight. At first one identifies the business-end of the male, extending out like a pistil. Then your gaze is trapped by peculiar structures around the base, some resembling the mandible of a viper, and then, from a different vantage, the maw of a venus flytrap, with delicate cilia and all. Simile might be our best mechanism for this visual foreignness; even Nabokov would liken one part of this insect physiology to hood of a Klansman.We may accept Nabokov as a consummate observer, but just what is he looking for? The significance of butterflies in his fiction is opaque, and the bugs themselves often make transient, marginal appearances. Perhaps his most substantial treatment of the insect is to be found in his 1930 short story, “The Aurelian.” It concerns an old shopkeeper who hopes to sell his butterfly specimens to finance a final collecting trip across the European continent. A sequence of absurd and coincidental obstacles spring up (a random spike in inflation, for instance) before he finally succeeds in cheating a customer out of the money. The story concludes with the old man eager to embark on his journey, just before dropping dead on his kitchen floor, left only to dream of the butterflies he would catch.As a symbol and vessel of promise, the butterfly is stretched to its limit in “The Aurelian”—a hope gripped so tenaciously that it ultimately buckles in on itself. To the old shopkeeper, butterflies represent freedom, but they elude him slightly, and then a little more, before betraying him, refusing (or at least not caring) to be used for his ends. The more we rely on the flighty butterfly, the more Nabokov reveals to us of their underlying vacuity.But just how significant is the loss of the symbolic butterfly? “I have no quarrel with works of art that contain no ideas at all,” wrote Susan Sontag in 1964. “On the contrary,” she argued, “much of the greatest art is of this kind.” Among the handful of artworks that qualified for this judgment, the famed proponent of erotics-over-interpretation identified the novel Lolita.As a writer of major literature, Nabokov’s work cannot withstand being completely bereft of ideas. But his governing dedication to sensuality and observation justify Sontag’s assessment. In the same way Nabokov did not write novels to stuff them with signs and themes, he did not take to the microscopes of Harvard or the hills of Wyoming to gaze upon transcendence. There was the sun, the spinning organ in the vial, the wings fluttering in the net. To an attuned eye and body, these sensations were enough.Above all, Fine Lines may be viewed as a book about the act of seeing. As Nabokov writes in The Eye, “I have realized that the only happiness in the world is to observe, to spy, to watch, to scrutinize oneself and others, to be nothing but a big, slightly vitreous, somewhat bloodshot, unblinking eye.” After flipping through pages of esoteric renderings of insect apparatuses, we probably feel ourselves insufficiently delighted. Butterfly genitalia may not be our preference, but it is difficult not to hope to see more of the world through Nabokov’s point of view.

The post: Noble-Winged Seraphs: On Nabokov’s Butterfly Illustrations, was published at: ARTnews

No Thoughts on Noble-Winged Seraphs: On Nabokov’s Butterfly Illustrations – @ARTnews
0 (0)