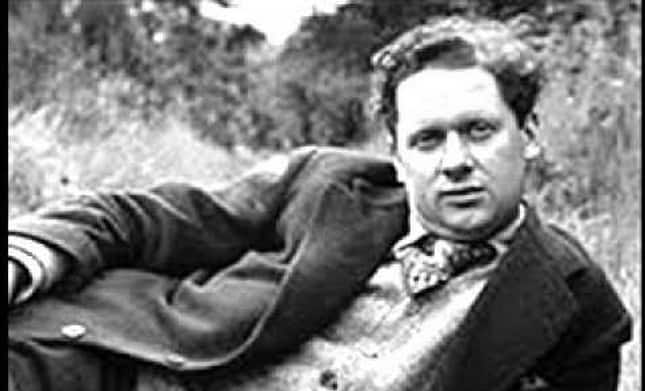 “To choose what I should read tonight, I looked through seventy odd poems of mine, and found that many are odd indeed and that some may be poems,” said Dylan Thomas in a 1949 BBC broadcast. “I decided not to choose those that strike me, still, as pretty peculiar, but to stick to a few of the ones that do move a little way towards the state and destination I imagine I intended to be theirs when, in small rooms in Wales, arrogantly and devotedly I began them.”

This introduction to an evening’s reading on the radio survives in Spotify’s playlist“Readings from Dylan Thomas,” which collects eight hours of not just the poet reading his own work, but others’ as well. (If you don’t have Spotify’s free software, you can download it here.) Though the hard-drinking, usually impecunious Thomas died young in 1953, he managed to attain an impressive degree of fame during his lifetime, especially by the standards of poets. His frequent reading tours and radio gigs ultimately made him something of a “people’s poet” for Great Britain.

“My grandfather made 145 separate engagements with the BBC,” says Thomas’ granddaughter Hannah Ellis in the British Council video on Thomas and the BBC above. “These included writing scripts, reading poetry and short stories, as well as acting. He also became a regular on many panel discussions, making him a well-known radio personality.” His ties with the radio world and resultant high public profile have kept his voice unusually well-preserved by comparison to those of his contemporaries: we can now hear him much more easily than even his fans could at the height of his fame in the late 1940s.

“I’ve bored my wife to death for years by saying (among other things that have also bored her to death) that when you listen to poetry you should always be given an idea of the ‘shape’ of the poem,” Thomas said in another BBC appearance. The 102 tracks of this Spotify playlist include a few of those non-poetic speeches, but only after a recitation of what we might call Thomas’ big hit, “Do Not Go Gentle Into That Good Night.” But as with the catalog of any recording artist, it pays to spend more time among the deep cuts — even the poems Thomas himself might have thought “odd indeed” — and these eight hours deliver plenty of them, each with a shape of its own.

This playlist will be added to our collection, 700 Free Audio Books: Download Great Books for Free.

The post: 8 Glorious Hours of Dylan Thomas Reading Poetry–His Own & Others’, was published at: Open Culture