The highlights were many during the two-night Dylan Fest in Nashville, a celebration of Bob Dylan in honor of the icon’s 75th birthday this week. Held at the historic Ryman Auditorium, the concerts — staged by the Best Fest folks behind Petty Fest and others — brought together singers and musicians, that despite genre differences, were all influenced by the timeless songs of Dylan. Kesha delivered a rapturous “I Shall Be Released” on Night 1 (and re-created the magic last night too); Jason Isbell and wife Amanda Shires commanded a three-song mini-set; and Ann Wilson, Emmylou Harris and Wynonna joined together for a rousing “Ring Them Bells.” Backed by the versatile and unfaltering Cabin Down Below Band (led by bassist and the night’s host Austin Scaggs), the performers all pulled off the heady task of making Dylan their own. Here’s our 11 favorite moments. 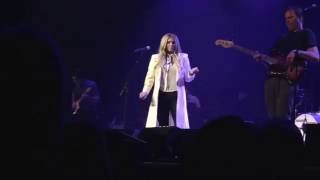 Fresh from her poignant perfornance of Dylan’s “It Ain’t Me Babe” at the 2016 Billboard Music Awards, Nashville native Kesha took the Ryman stage barefoot on Night 1, dressed in a rhinestone-studded powder blue jacket. Armed with an array of tangled emotion stemming from her protracted legal battle with producer Dr. Luke, she managed to pour every ounce of that experience into a dazzling rendition of “I Shall Be Released.” There was no mention of the lawsuits and allegations directly, nor was any needed, but it impossible not to empathize with the singer’s obvious hope that freedom from the whole nasty mess isn’t long away.

Jason Isbell was arguably the second night’s most anticipated act, and as such he was able to treat fans to a mini-set of his own toward the end of the show. Earlier in the day, he spoke with Rolling Stone Country, marveling at Dylan’s ability to use songs as weapons, and ended up showing a few prime examples. He began alone on the stage with “It’s All Over Now, Baby Blue,” turning in a quiet, fuzzed-out piece of rock poetry focused on ceaseless change. He switched gears for the next song, bringing the eight-piece Cabin Down Below Band back out for a rocking and rolling rendition of the Traveling Wilburys’ “Tweeter and the Monkey Man,” Dylan’s send-up of Springsteen.

Isbell stuck around for one more timeless protest tune, backing his wife Amanda Shires for her take on “Hurricane,” the epic tale of racial injustice and Rubin Carter, the man whose chance to become a world champion boxer was stolen by a false murder rap. With Isbell’s tasteful slide guitar and Shire’s perspective on the tune – which felt more sympathetic than outraged – it hit home and earned a gigantic standing ovation. “It’s funny how his songs seem so timely no matter when you hear them,” Isbell told Rolling Stone Country. “You could put [‘Hurricane’] in Baltimore and it would make perfect sense this week. He was able to capture really specific moments in time, but due to the fact we haven’t really evolved too much, and that he wrote those songs really well, they still apply.” 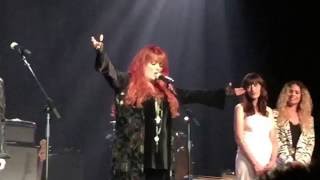 Wynonna and the Big Noise more than lived up to their name with a fierce, full-throttle rendition of the bluesy “Million Miles,” from Dylan’s superb 1997 LP Time Out of Mind. “I haven’t been out of the house for a week,” the flame-haired singer told the crowd, marveling that her first excursion out took her to the Mother Church of Country Music. “God bless you, Robert Zimmerman,” she added. Later, she returned to the stage with Emmylou Harris and Heart’s Ann Wilson for a heavenly version of “Ring Them Bells.”

Let’s be honest: After a few hours, it’s necessary to take a break from the rambling, intricately detailed sermons that make up Bob Dylan’s irreplaceable repertoire, if only to re-energize for the next round. Enter Butch Walker, a 200-pound tornado of rock & roll destruction who took the Ryman stage like a pro wrestler and would have body-slammed everyone in the audience if given a chance. His epic freak-out on the fiendish love song “From a Buick 6” was like nothing else on the second night’s set list, a chaotic whirlwind of flying hair and ‘roid-raging awesomeness that turned a polite bunch of musical academics into a rowdy mass of fist-pumping trailer folk. Walker only fed off the chaos, swinging his guitar and seeming willing to destroy anything that he came into contact with, only letting a few smiles sneak out to let the crowd know the fix was already in. The climax: Walker hurling his guitar toward a crew member off stage — who was absolutely not ready for the flying elbow of hardwood and steel. A cameraman walked right into its path, oblivious to the doom heading toward him as the roadie pushed through just in time, safely catching the projectile. The crowd went nuts and Walker raised his fist in triumph. Someone get this man a championship belt.

Ruby Amanfu’s voice is exquisitely unique, and at Dylan Fest the Ghana-born beauty used it to stunning effect on the lilting “Not Dark Yet,” a track she included on her 2015 album Standing Still. Dressed in a striking ruby-red gown (naturally), Amanfu presented Dylan’s ode to ever-impending doom in stop-you-in-your tracks style. You could hear a pin drop in the Ryman Auditorium as her voice swayed between barely audible and rising in waves of passion. Released by Dylan in 1997, “Not Dark Yet” was one of the most recent offerings to be shared at Dylan Fest, and Amanfu seemed to find a way to expand on its thesis. Built on a lifetime of searching the human condition for some kind of meaning, it was delicate, patient and profound, but presented no answers. Instead, it seemed to say the best to hope for is that darkness stays just over the horizon, and that’s an achievement worthy of collective pride. When she finished, the longtime Nashville favorite was treated to a standing ovation that sent fears about dark times away for the rest of the night.

Lots of Bob Dylan’s songs were influenced by and could be classified as country tunes, but perhaps none would fit in better with country’s current status quo as “Don’t Think Twice It’s Alright,” first released in 1963 on The Freewheelin’ Bob Dylan. Kacey Musgraves performed the track midway through the second night, and it felt like such a natural fit she ought to record it right away and release it on a three-track EP or something. Looking cool as a cucumber in a billowy blush dress and with guitar player/harmony partner Misa Arriaga in support, Musgraves perfectly captured the song’s sarcastic side, the moment when the relationship you’ve been building and pining for falls apart, but you’re still so in love you can’t even get mad yet. The lyrics are right up her alley: “You just kinda wasted my precious time / But don’t think twice, it’s alright.” She even played a little harmonica, added some steel guitar and opted for bongos instead of drums to soften the deceptively sharp blow.

Charlie McCoy is one of the original “A Team” members, the Nashville Cats who were every producer’s first call when a big session came up and made Music Row into the recording hub that it is today. In the Sixties, McCoy was a multi-instrumentalist who played harmonica, guitar, bass, drums, and a variety of wind and brass instruments on records for Roy Orbison, Elvis Presley and, of course, Bob Dylan. It was McCoy’s talent that actually convinced Dylan to record in Nashville in the first place, which gave birth to the Blonde on Blonde album and brought Music City worldwide renown. At 75 years old, McCoy was a featured member of the Dylan Fest house band, and he was still bad to the bone. He played on about half of Night 2’s 31-song set list and never missed a note on his trusty mouth harp. It was kind of like seeing what Dylan saw all those years ago, in fact: McCoy would stand onstage, relaxed and arms behind him, wait for a subtle signal from a fellow band member and spring into action, tearing into a fiery solo or tasty fill with a first-time-ever feel that somehow also felt like it had always been. 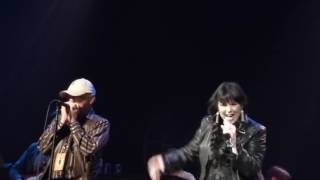 Pairing an iconic song with an iconic vocalist, the celebration of all things Dylan reached a “Crazy on You” classic-rock crescendo as Ann Wilson delivered “Like a Rolling Stone,” the night’s final single-artist performance. An all-hands-on-deck singalong followed to close the show for good, but Wilson’s joyful, shout-singing rocker was its spiritual climax. Dressed in all black – black leather jacket, black cocktail dress and black boots – Wilson wasted no time getting the crowd behind her. With the eight piece Cabin Down Below Band in support and with 75-year-old Nashville Cat Charlie McCoy providing the song’s famous harmonica refrain, a Ryman Auditorium audience of about 2,000 rose to its feet and hung on every word of each verse, joining in on the chorus. By song’s end, Wilson had to essential yell to be heard over the top of the crowd, a fitting end to two nights of loving tribute.

Her grandfather was one of the seminal influences on Dylan’s soul-piercing songwriting, so watching Holly Williams deliver a sweet, acoustic version of “The Times They Are a-Changin’” from the same stage that cemented Hank Williams’ legend was a magnificently understated, yet powerful representation of past and present. It also afforded the night’s first appearance of Hall of Fame legend Charlie McCoy, whose harmonica accompaniment throughout the three-hour show was as key an element to the proceedings as his guitar-playing on Dylan’s Highway 61 Revisited and Blonde on Blonde had been 50 years earlier. 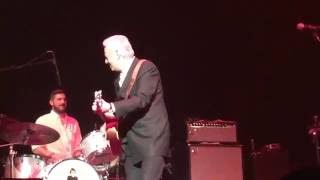 Most of Dylan Fest was understandably dedicated to the icon’s incredible way with lyrics, but when you’re a guitar-shredding, string-bending master like Tommy Emmanuel, you find a different way to express Dylan’s genius. Most of the crowd at Night 2 had probably never heard of Emmanuel, but they will remember his incredible performance. A student of legendary picker Chet Atkins, Emmanuel showed off lightning-fast guitar playing on one of Dylan’s few instrumental tracks, the uber-appropriate “Nashville Skyline Rag.” Emmanuel led the song with a flatpicking style that seemed like a walk in the park to him, but when he threw the melody to other players, they simply could not keep up. Even the pedal steel, which is usually played with three extra picks and four extra strings when compared to a regular guitar, was no match for Emmanuel’s blistering, effortless speed. It was a mind-boggling performance met with a roaring standing ovation.

Nashville band and rock festival favorite Moon Taxi unleashed an explosive take on one of the most popular, enduring live tunes in the Dylan canon, his 1967 epic “All Along the Watchtower.” Taking their cues from guitar great Jimi Hendrix – who definitively covered it not long after the original – and even U2, whose own live version was a longtime staple for the Irish rockers, the quintet came out swinging, whipping the audience into earsplitting ecstasy and garnering one of the night’s most thunderous ovations.

The post: 11 Best Things We Saw at Dylan Fest, was published at: Rolling Stone