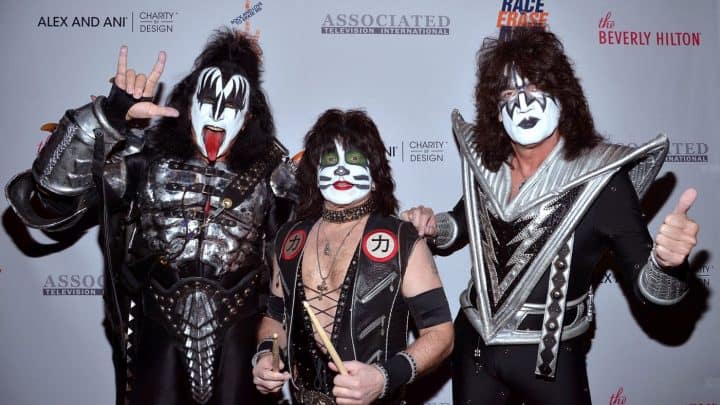 KISS performed as a trio at the Race To Erase MS fundraising gala last night (Friday, April 15) at The Beverly Hilton in Beverly Hills, California. Absent from the event was KISS guitarist/vocalist Paul Stanley, who was forced to sit out the show due to a shoulder injury.

KISS was introduced at the event by former “American Idol” judge Randy Jackson, who explained Stanley‘s absence and added that the KISS frontman would be well enough to tour with the band this summer. Special hosts for the evening included Ozzy Osbourne‘s wife and son, Sharon Osbourne and Jack Osbourne, the latter of whom was diagnosed with multiple sclerosis in 2012.

KISS played four songs at the at the fundraiser that supports Nancy Davis‘s Center Without Walls program. The event, which also featured appearances by Eric Benet, David Foster and Jordan Smith, the winner of “The Voice”, included a one-of-a-kind live auction featuring fabulous vacation getaways and experiential packages.

Stanley broke the news of his injury yesterday on Twitter. “Tore my bicep tendon,” he wrote. “Surgery reattached it with a screw and stitches to anchor in place. Not much I can do now!” Several hours later, he added in a separate tweet: “Thanks to my AMAZING doctor I WILL be great & ready to rock WAAAAYYYY before the tour! CAN’T WAIT! #‎FreedomToRock‬”

Video of KISS performing the songs “Cold Gin” and “Rock And Roll All Nite” at Race To Erase MS can be seen below.

Race To Erase MS has been instrumental in funding many pilot studies that have contributed to drugs now on the market and other very important therapies that are improving the lives of people suffering from MS.

KISS previously performed as a three-piece in 2007, when a heart issue forced Stanley to sit out the band’s concert at the Soboba Casino in San Jacinto, California.

KISS‘s “Freedom To Rock Tour” is scheduled to begin July 7 at the Taco Bell Arena in Boise, Idaho. The two-month run will see the band playing cities that they haven’t visited in more than ten years. 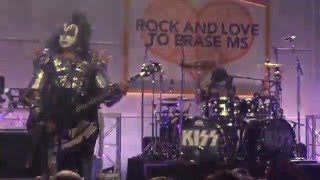 The post: KISS Performs Without PAUL STANLEY At ‘Race To Erase MS’ Fundraising Gala, was published at: Blabbermouth.net