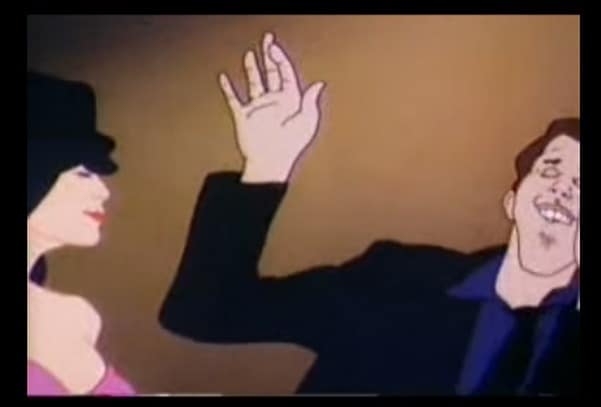 Director John Lamb and his partner, Bruce Lyon also deserve recognition for their taste in source material. Singer Tom Waits’ “The One That Got Away” is about as cool as it gets, and the animated Waits is a dead ringer for his then-28-year-old counterpart, with eyes and choppers slightly exaggerated for maximum effect.

The short was conceived as a demo model. Lyon and Lamb hoped to convince Ralph Bakshi, director of the feature-length, X-rated, cartoon adaptation of R Crumb’s Fritz the Cat, to use their newly patented “pencil preview” technique  on an upcoming project. The result is definitely more provocative than the non-narrative bouncing ball videos developers would use to show off fledgling CGI techniques a decade or so later.

A portion of raw footage below shows Waits and professional stripper Donna Gordon—who had previously appeared inJohn Cassavetes’ The Killing of a Chinese Bookie—slinking around a largely bare soundstage. The crew amassed 13 hours of video that were whittled down to 5,500 Rotoscoped frames. These were individually re-drawn, inked, and hand-painted onto celluloid acetate.

Gordon, whose animated look appears to have exerted quite an influence on the following decade’s cartoon femme fatale, Jessica Rabbit, recollected that her co-star was “very nice, shy and quiet” and that he smelled strongly of cigarettes and booze.

Just as Gordon’s fantasy stripper eluded the animated Waits, this innovative film failed to find distribution, and without commercial release, it sank into obscurity.

(I invite Waits fans to join me in imagining an alternate universe, in which it becomes the greatest Saturday morning cartoon ever, providing morning-after comfort to very particular breed of hungover early-80s nighthawks.)

Tom Waits For No One will be added to theAnimation section of our collection, 725 Free Movies Online: Great Classics, Indies, Noir, Westerns, etc...

The post: Tom Waits For No One: Watch the Pioneering Animated Tom Waits Music Video from 1979, was published at: Open Culture

No Thoughts on Tom Waits For No One: Watch the Pioneering Animated Tom Waits Music Video from 1979 – @Open Culture #tomwaits #johnlamb0 (0)