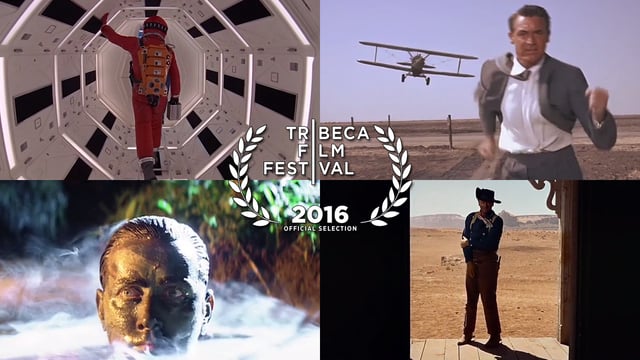 Harold Lloyd hanging high above the city on the hands of a skyscraper’s clock. A shot through the eye on the Odessa steps. Another eye, this one readied for the razor blade. King Kong roaring atop a skyscraper of his own. Snow White offering a perch to the bluebird. Dorothy, the Cowardly Lion, the Tin Man, and the Scarecrow skipping off toward the distant Emerald City. Charles Foster Kane orating before his own enormous portrait. Norma Desmond’s unsettling approach through ever-softer focus.

Roger Thornhill pursued by the biplane. Patton saluting before the enormous American flag. Alex DeLarge staring, in his bowler and past his prosthetic eyelashes, straight into the camera. Rocky jogging up the Philadelphia Museum of Art steps. A camouflage-painted Willard rising out of the swamp. The slow-motion march of Messrs. Blonde, Blue, Brown, Orange, Pink, and White. The opening-night reception dance after Max Fischer’s Heaven and Earth. Leonidas kicking the messenger into the hole. The young Mason Evans, Jr. flat on the grass, staring up at the skies.
Oh, and Charlie Chaplin using Scraps the dog as a pillow. I could have described more of the most memorable shots of the past century of cinema history, but in the video above, which presents one hundred years of film with one shot selected from each year, they all speak for themselves. “While many of these shots are the most recognizable in film history, others are equally iconic in their own right,” writes the video’s creator Jacob T. Swinney, “For example, some shots pioneered a style or defined a genre, while others tested the boundaries of censorship and filmgoer expectations.”
While the earliest pictures here, a group starting in 1915 with D.W. Griffith’s The Birth of a Nation, have had plenty of time to establish themselves in our visual lexicon — even for those of us who’ve never actually sat down and watched the movies in full — the more recent selections clearly require some guesswork: Swinney’s memorable shots from the past decade come from sources as varied as There Will Be Blood and The Tree of Life, Avatar, and The Avengers.
And some cinema purists, as opposed to structural purists, will regret that, with these strictly single shots, the famous cuts (in both senses, when it comes to Un Chien Andalou‘s eyeball) don’t come across. Me, I’d have bent the rules to pay proper tribute to Lawrence blowing out the match, but that’s just one cinephile’s opinion. Besides, you’ve got to see it in context, projected in 70-millimeter, to really feel why it can stand for all of 1962 in film — and then some.

O artigo: The 100 Most Memorable Shots in Cinema Over the Past 100 Years, foi publicado em: Open Culture

The post: The 100 Most Memorable Shots in Cinema Over the Past 100 Years, was published at: Open Culture