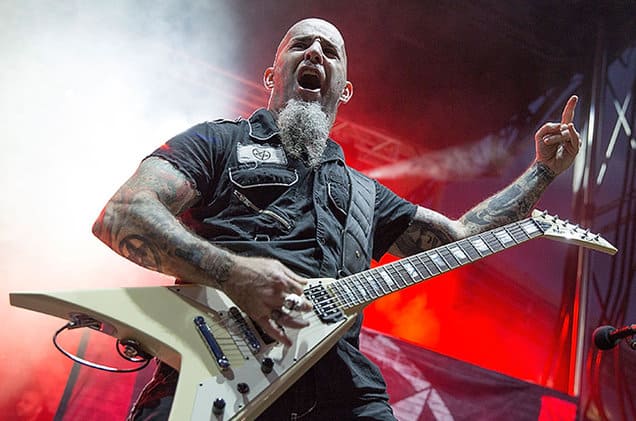 In a brand new interview with The Irish Sun, ANTHRAX guitarist Scott Ian spoke about how his band was affected by the terrosit attacks of last November when an EAGLES OF DEATH METAL concert in Paris was targeted, killing 89 people.

“Anytime a terrorist action happens like that, in any context, because we’re all human, we all have to share this planet, so I get it,” he said. “They crossed the line into the world of rock.

“I don’t want to live on the same planet, but I don’t have a choice. I also don’t have the solution, so all I can do is, once in a while, spew and vent a bunch of lyrics about it.”

ANTHRAX was on tour in Europe with SLAYER at the time of the French attacks, but refused to cancel the rest of the dates, unlike bands like LAMB OF GOD and DEFTONES, who returned home to America almost immediately.

“We didn’t go home, ANTHRAX and SLAYER,” Ian said. “We didn’t leave, and we finished our tour. Unless somebody was going to tell us ‘You can’t play the rest of your shows,’ that was the only way we weren’t going to finish.

“There have been times in the past when we were going to go to Israel and we were told it wasn’t a good time to come, and it got postponed and we went months later. And I believe there might have been a time we were scheduled to go to Indonesia and the same thing happened. They said the climate just wasn’t right. If somebody’s telling you that, you listen to them. A year later, we went and played Jakarta, so it’s not something we’re actively thinking about.”

ANTHRAX‘s latest album, “For All Kings”, sold 34,000 copies in the United States in its first week of release to land at position No. 9 on The Billboard 200 chart.