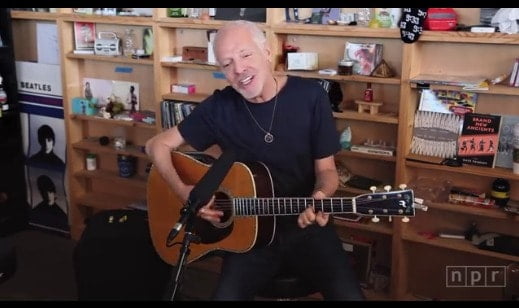 Having recently released a new album featuring acoustic versions of his big hits, Peter Frampton is now back on tour, playing in some smaller venues across the U.S. But no venue–not the Gillioz Theatre in Springfield, Missouri, nor the Tobin Center for Performing Arts in San Antonio, Texas–is quite as small as the one we’re featuring today. Above, watch Frampton perform at the desk of NPR’s All Songs Considered. The performance is part of NPR’s Tiny Desk series, and the setlist includes acoustic versions of “Baby, I Love Your Way,” “Lines On My Face,” and “All I Want To Be (Is By Your Side).” Other recent Tiny Desk performances include Graham Nash, Wilco, Natalie Merchant, and Ben Folds. Enjoy.
Follow Open Culture on Facebook and Twitter and share intelligent media with your friends. Or better yet, sign up for our daily email and get a daily dose of Open Culture in your inbox. And if you want to make sure that our posts definitely appear in your Facebook newsfeed, just follow these simple steps.

The post: Peter Frampton Plays a Tiny Desk Concert for NPR, Featuring Acoustic Versions of His Classic Songs, was published at: Open Culture

What Makes the Stradivarius Special? It Was Designed to Sound Like a Female Soprano Voice (…) – @Open Culture #stradivarius