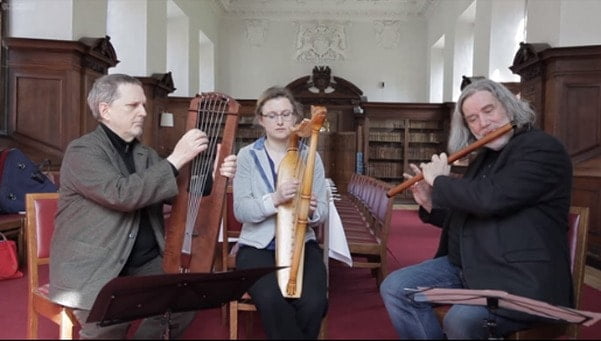 Above and below, you can watch musicians perform “Songs of Consolation,” a 1,000-year-old song set “to the poetic portions of Roman philosopher Boethius’ magnum opus The Consolation of Philosophy,” an influential medieval text written during the 6th century. According to Cambridge University, the performance of the piece, which had been lost in time until recently, didn’t come easily:

[T]he task of performing such ancient works today is not as simple as reading and playing the music in front of you. 1,000 years ago, music was written in a way that recorded melodic outlines, but not ‘notes’ as today’s musicians would recognise them; relying on aural traditions and the memory of musicians to keep them alive. Because these aural traditions died out in the 12th century, it has often been thought impossible to reconstruct ‘lost’ music from this era – precisely because the pitches are unknown.

Now, after more than two decades of painstaking work on identifying the techniques used to set particular verse forms, research undertaken by Cambridge University’s Dr Sam Barrett has enabled him to reconstruct melodies from the rediscovered leaf of the 11th century ‘Cambridge Songs’.

The song is performed here by Benjamin Bagby, Hanna Marti and Norbert Rodenkirchen, three members of the medieval music ensemble known as Sequentia.

The post: Ancient Philosophical Song Reconstructed and Played for the First Time in 1,000 Years, was published at: Open Culture

Why Doctor Strange Will Be Different From All Other MCU Movies, According To Benedict Cumberbatch – @CinemaBlend #mcumovies #benedictcumberbatch #doctorstrange