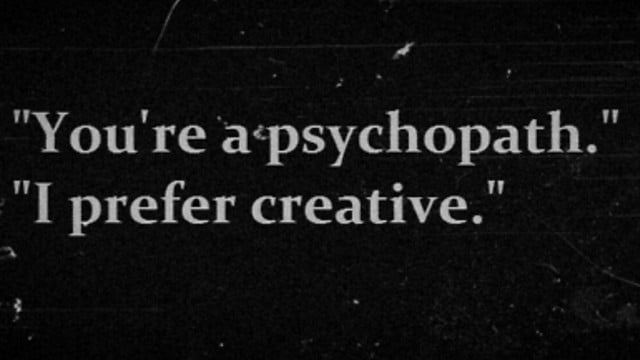 If you consider yourself a creative person, you just might have more in common than you think with psychopaths.

According to a new study in the journal Personality and Individual Differences conducted by a psychologists at De La Salle University in Manila, led by Adrianne John Galang, artists, actors, and musicians often share key personality traits with individuals who have “psychopathic traits.”

Based on their findings, reports the Daily Mail, it appears that creative individuals tend to have higher levels of emotional disinhibition, and to be prone toward dishonesty and risk taking.

Luckily, artists don’t appear to share psychopaths’ attitudes toward cruelty, although the findings do seem to explain the stereotype of the arrogant artist or the narcissistic musician, prone to pitching a fit over the smallest issue. A quote from Becca Fitzpatrick’s Crescendo.
Photo: via Tumblr.

“Emotional disinhibition, in the form of psychopathic boldness, is actually integral to some creative personalities and functionally related to the creative process,” according to the study. “A creative field might not just shape a person into a more arrogant or dishonest personality, it might be actively selecting them, not for the sake of having disagreeable traits, but because such traits meaningfully co-vary with creativity itself.”

The results back up some of the existing stereotypes that tend to follow creative types. “Stories of artists who struggled through a series of failed relationships and were even cruel to those around them have also helped to fuel suspicions that creativity may have roots in psychopathy,” notes the Daily Mail.

Other recent scientific studies have found that our brains are hard-wired to appreciate art, and that our ability to do so has evolved over time. Meanwhile, artists’ brains may be more fully developed, and creating art has even been found to improve brain function.

As for Galang, he believes that the results of his study might help foster creativity “in both educational and professional settings” by promoting the “cultivation of forms of boldness, while seeking to mitigate the more harmful forms of disinhibition.”

Why Doctor Strange Will Be Different From All Other MCU Movies, According To Benedict Cumberbatch – @CinemaBlend #mcumovies #benedictcumberbatch #doctorstrange0 (0)