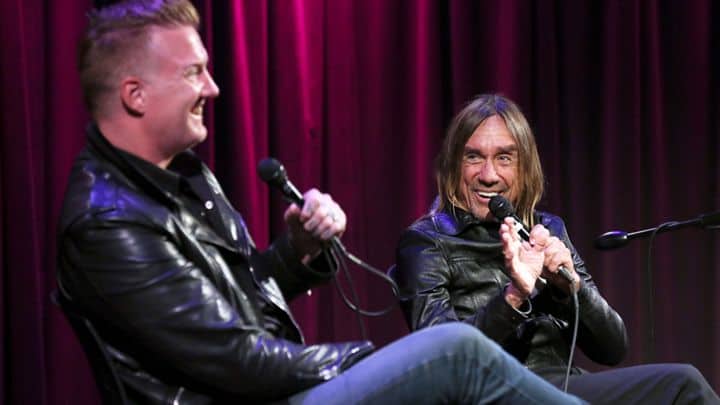 “I’m always ready to take a risk. I don’t work in a bank,” Josh Homme said of Post Pop Depression, his new album with Iggy Pop, during a talk between the two collaborators Wednesday night at the Grammy Museum in Los Angeles. “I’m here to take a leap and see what’s out there.”

The onstage interview for an audience of 200 focused mostly on Depression, which debuted in March at Number 17 on the Billboard Top 200, the highest charting album of Pop’s career. Homme arrived in a black motorcycle jacket and jeans, while Pop slouched in a chair beside interviewer Scott Goldman, vice president of the Grammy Foundation.

Unlike most events in the series, there was no live music, though fans were shown two songs from the band’s performance in a still-unseen episode of Austin City Limits. During the interview of the Queens of the Stone Age leader and the protopunk icon, we learned some surprising details about their creative process, stretching from Iggy’s work with Bowie to the new album sessions last year in Joshua Tree, California.

1. Homme’s first Iggy record was Raw Power.
Homme first heard Iggy and the Stooges when he was barely 11 years old, after picking up Raw Power at Tower Records during a trip to San Diego with his dad. He chose the album, he says now, based on the title and Mick Rock’s striking cover photo. “I didn’t understand any of it,” Homme said of the music with a laugh. “It kind of scared me and excited me.”

“Too much record for you, boy,” cracked Pop, who called it “my noisiest record. It hits harder. It’s going for a certain thing. I think that record just barely gets there. Most of the cuts are: ‘Is it a song or is it a problem?'”

2. Iggy played Raw Power for unsuspecting school children.
During the recording of Raw Power in London with producer David Bowie, even Iggy thought the Stooges’ target audience should be schoolkids. Between sessions, he remembers playing the album-in-progress for random children. “I would take the guitar players in the Stooges and we’d look for kids in their school uniforms,” Iggy says. “We would say, ‘Come to our house. We’ve got this record we know you’re gonna love!'”

3. For Iggy, possible retirement from rock & roll doesn’t mean he’s tired.
At 69, Iggy has been talking of making Post Pop Depression a possible farewell album as he slows down his music activity and focuses on acting and voice-over work. But that doesn’t mean he’s lost his protopunk nerve. “If I want to put pedal to the metal for five minutes on a given night, look the fuck out, right? That I can do.”

4. Iggy was initially drawn to Homme’s unflashy fashion sense.
Iggy and Homme first connected at the Kerrang! Awards in 2001, where the godfather of punk was picking up a lifetime achievement honor. They also posed for a magazine cover that week with Marilyn Manson. “I was impressed with Josh,” Pop says. “He didn’t look like the others there. He was the only guy besides myself who wasn’t dressed up in some sort of satanic space outfit.”

5. Hearing Queens of the Stone Age sent Iggy on an emotional roller coaster.
Shortly after that meeting, the two shared a bill at an Italian music festival. Most fans seemed to be waiting for Linkin Park, but Pop made an important discovery in Homme’s band. “I was looking for something I could sing with, and express myself through – and there was space in all the music,” he said of Homme’s work with QOTSA. In most contemporary music, he lamented, “There’s less and less feeling allowed. There are fewer and fewer happy songs, sad songs, reflective songs. I hear less and less of it. When I was listening to his ...Like Clockwork, there were several that really affected me emotionally. They made me moody. They made me a little bit lonesome. It was excellent music and it was the craft.” 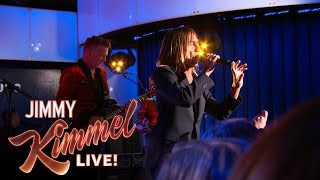 6. A straight rock record was never the plan for Iggy and Homme.
There was no chance that their project together would sound like a Stooges record. “There’s no such thing as doing that again,” Homme says, noting that Pop now has the potentially richer perspective of a rocker pushing 70. “It’s not supposed to sound like the goddamn Stooges … It should be a chance to be something else from what you do all the time. But every record should be that way.”

7. Iggy wrote Homme about his sex life as a way of recapturing his own mojo.
In a “dossier” of materials he sent to Homme in preparation for their coming sessions, Iggy included a dozen essays on his own sex life. Some of that ended up in “Gardenia” and other songs. “I was having a dry spell in my life. It happens to everybody. I thought, how much of my life am I going to have to wreck to get my sex life back?” says Pop. “Let’s write about what it was to make sure it was worth it.”

8. Homme has created his own music factory in the SoCal desert.
Iggy was impressed not only with Homme’s skills as a guitarist, songwriter, producer, but in his entire operation and a family of players and crew. “He’s got a little Motown going on in the valley in the desert,” the Detroit-born Pop says. “He has loyal technicians. The guys on the road with us are the same guys that recorded the album and tuned the guitars and lit the cigarettes then.”

9. Bowie urged Iggy to try a baritone.
During the making of Lust for Life and The Idiot in Berlin, the producer suggested a new style for Iggy. “When I was doing the German records, David Bowie prompted me to drop the sneering and go for the baritone: ‘You’re more impressive that way.’ On those records, he was setting up these musical motifs, and I was just singing that way. It just came out of me.”

10. The pair view Post Pop Depression and the Berlin albums as spiritually linked.
Since news of the Pop/Homme collaboration first emerged, there have been comparisons to the Bowie-produced records made in Berlin. For Homme, the main connection is a commitment to pushing the boundaries. “Those records were clearly made at the speed of inspiration,” Home says. “They sound like that, don’t they? They’re trying to stand on their own. It seems like this joyous, wonderful, effortless thing, and we tried to make a record we would enjoy too. They cared about those records and we cared about ours.” Iggy’s explanation was both more primal and metaphysical: “Once in a while a little monkey gets in your bones to do something a little more real.”

The post: 10 Things We Learned From Iggy Pop and Josh Homme’s Grammy Museum Talk, was published at: Rolling Stone

Young Patti Smith Rails Against the Censorship of Her Music: An Animated, NSFW Interview from 1976 – @Open Culture #pattismith
0 (0)