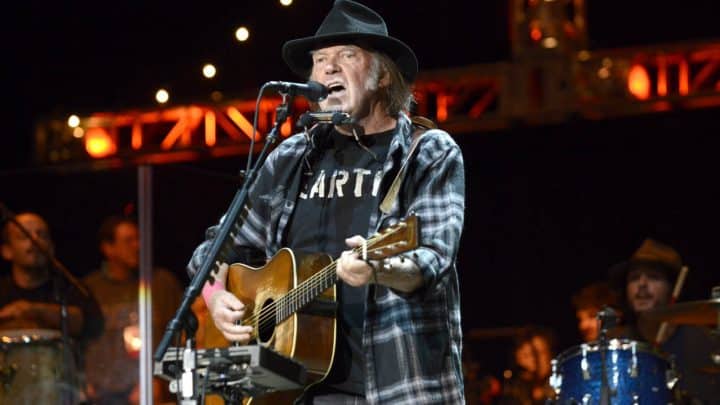 The as-yet-untitled record is due to launch in June and sees him once again team up with Promise Of The Real, the band fronted by Micah and Lukas Nelson – sons of country star Willie. Young recorded 2015’s The Monsanto Years with the pair.

Young tells Rolling Stone: “I’m very happy with what I’m doing. I don’t know what its place is in the world, but I like it.

“I feel really good and amped and energised – and I feel like I’m doing something that I’ve never done before. It’s not just music, it’s a soundscape. It’s kind of like flying around listening to things with your eyes closed.”

He described albums sessions as “effortless” and adds: “It’s like a live show, but it’s not like a live show. Imagine it’s a live show where the audience is full of every living thing on Earth – all of the animals, insects, amphibians, birds and everybody – we’re all represented. And also they overtake the music once in a while and play the instruments. It’s not conventional but it is based on live performance.”

Further album details will be revealed in due course.

Young will release his films Human Highway and Rust Never Sleeps on DVD on April 22.

The post: Neil Young ‘energised’ by album sessions, was published at: Classic Rock