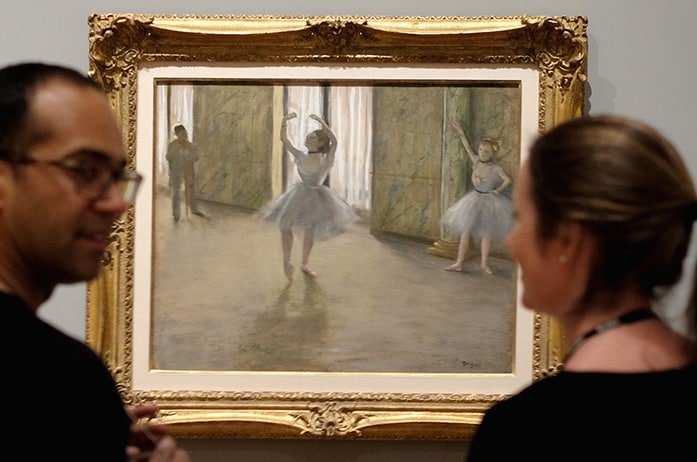 NEW YORK, NY.- With the major exhibition Edgar Degas: A Strange New Beauty, The Museum of Modern Art brings new focus to Hilaire-Germain-Edgar Degas’s (French, 1834–1917) extraordinary and rarely seen monotypes and their impact on his wider practice. On view March 26 through July 24, 2016, it is the first exhibition in the U.S. in nearly 50 years to examine these radical, innovative works—and MoMA’s first monographic exhibition of the artist. Edgar Degas: A Strange New Beauty features approximately 120 monotypes along with some 60 related works, including paintings, drawings, pastels, sketchbooks, and prints. Organized by Jodi Hauptman, Senior Curator, Department of Drawings and Prints; with Karl Buchberg, Senior Conservator; and Heidi Hirschl, Curatorial Assistant, Department of Drawings and Prints, The Museum of Modern Art; and Richard Kendall, independent art historian and curator. MoMA is the sole venue for the exhibition.

A towering figure in 19th-century art, Degas is best known as a painter and chronicler of the ballet. Yet his work as a printmaker reveals the true extent of his restless creativity, as he mixed techniques with abandon in his studio and shared recipes with colleagues for producing unconventional effects. The monotype process involves drawing in black ink on a metal plate that was then run through a press, typically resulting in a single print. Captivated by the medium’s potential, Degas made more than 300 monotypes during two discrete bursts of activity, from the mid-1870s to the mid-1880s, and again during the early 1890s.

Taking the medium to new and radical ends, Degas abandoned the academic drawing of his youth, inventing a new repertoire of mark-making that included wiping, scraping, scratching, fingerprinting, and rendering via removal. Enigmatic and mutable forms, luminous passages emerging from deep blackness, and a heightened sense of tactility characterize the resulting works. The freedom Degas found in such techniques is an important theme of the exhibition, and the presentation links his efforts in monotype—the way he moves the printer’s ink with ease across the slick metal plate, resulting in a more liberated form of description—to works in other mediums.

Edgar Degas: A Strange New Beauty unfolds chronologically, from Degas’s introduction to monotype in the 1870s through his enthusiastic embrace of the medium. The exhibition offers a sense of his immersion, discoveries, experiments, and innovations, and investigates the broader consequences of his engagement with monotype.

Modern Life
For Degas, who was always searching for new means to describe new subjects, monotype proved to be the perfect medium to capture the essential features of modern urban life. The exhibition highlights Degas’s views of passersby on city streets, their faces blurred (Heads of a Man and a Woman, c. 1877–80), and bustling street scenes as figures cross paths (On the Street, 1876–77), along with signs of the era’s industry and commerce (Factory Smoke, 1877–79), the repetitive and arduous labor of Ironing Women (c. 1877–79), and the costumes of women lingering scandalously solo at cafés (Young Woman in a Café, c. 1877).

Of Degas’s urban subjects in monotype, it was the ballet and the café concert that offered the perfect melding of subject and means. In these works, Degas focused on fundamental aspects of the modern experience in an era of expanded entertainment, illumination, and motion. Degas once said that drawing dancers was just “a pretext for rendering movement,” a pictorial challenge that monotype gave him the means to address. While Degas’s images of the ballet take place on the stage as dancers leap into the air, as seen in Pas battu (c. 1879), they reflect the velocity and tempo of city life.

For late-19th-century urban dwellers experiencing the advent of 24-hour lighting, the city was always illuminated—and always in motion. Degas used the technical possibilities of the monotype to foreground the lighting of the ballet and café concert—gaslight and the new electric light. In works like Dancer Onstage with a Bouquet (c. 1876) or Café Singer (c. 1877–78), footlights transform the performer’s body, catching the translucency of tutus or turning faces into masks. In his café scenes, lighting is endlessly refracted in the theater’s mirrors and gilded architecture, creating an enchanted spectacle.

Backstage at the Ballet and in the Brothel
Degas used small-scale plates to portray the backstage at the ballet and the interiors of brothels in monotype. The exhibition includes a group of illustrations for The Cardinal Family, a collection of stories about the amorous adventures of two young ballerinas, written by Degas’s friend Ludovic Halévy. Much of the action takes place backstage or in the theater’s wings, and Degas depicts the flurry and flux of backstage spaces by deploying gestural marks and smudges to suggest hustle and bustle, reflections in mirrors, and kaleidoscopic swirls of legs and arms, and by cropping bodies with the plate’s edge to imply motion. Seen together, these monotypes show Degas’s ever-active eye shifting from long views to close-ups, focusing on the empty centers of waiting rooms, and pressing close to the dancers as if taking on the vantage point of their male admirers. Although Degas’s illustrations were not used for the book’s initial publication, they demonstrate that narrative was a springboard for experimentation.

Degas’s monotypes depicting prostitutes in brothel interiors are also on view in the exhibition—including several owned by Pablo Picasso—to explore how and why Degas treated this subject in monotype. For Degas, monotype served this subject in key ways: his gestural marks convey a space of flux and financial exchange, and his free brushwork encouraged caricature. The addition of pastel on some monotypes allowed Degas to further describe these scenes. Degas’s Two Young Girls and Waiting for the Client (both c. 1877–79) portray women sitting unselfconsciously and inelegantly, apparently unconcerned about prospective clients, who in contrast often appear unsure of themselves, apprehensively looking in from the margins.

Bathers
Degas’s most daring application of monotype is in his depictions of female bathers in intimate settings. In these works, he deploys radical compositional and technical innovation, portraying private acts of washing and grooming and dramatically illuminating bodies and surroundings. Degas contorted these bathers into awkward, unusual, and seemingly impossible poses. Degas’s renderings are tactile, rough, and unresolved, with ambiguous contours blurring distinctions between body and environment.

Degas created these images primarily by subtraction—laying down a curtain of ink on the plate, he drew by removal, conjuring an image out of darkness by wiping the ink away with a process that has come to be known as the “dark-field” technique. Broadening his tool kit, he used brushes with dry, hardened bristles to create striated patterns, a hard-pointed implement to incise into the ink, sponges or cloths to dab or smoothly move the ink around, his hands to sculpt his subjects, his thumb and palm prints to impress texture, and his fingernails for contour, all of which can be seen in The Fireside (c. 1880–85), one of Degas’s largest monotypes. In focusing on how Degas uses monotype, the exhibition calls attention to the way this medium allows the artist to access and express private moments in a deeply visceral way.

Landscapes
After a hiatus of several years, Degas returned to producing monotypes in 1890. Following an excursion though the Burgundy region of France, Degas sought to capture the experience of the landscape. Using oil paint instead of black printer’s ink, he created a series of abstract landscapes—exemplified by MoMA’s Forest in the Mountains (c. 1890)—that are among the most radical works of their time. Inspired by experience or imagination, these landscapes allude to the natural world or conjure meteorological effects, while undermining any sense of the earth’s solidity and stability.

The use of oil paint in monotype was a key innovation, introducing color as well as an element of unpredictability: the fluid paint ran under the pressure of the press, and Degas experimented with rollers, cloths, fingerprints, and coarse wiping. On top of these washes of color, Degas often added pastel for emphasis—as seen in his 1892 Landscape with Rocks (Paysage avec rochers)—highlighting particular geologic formations or adding in hedges or trees, resolving his indistinct compositions into landscapes that took familiar and more recognizable form.

Degas exhibited a group of these works at a Paris gallery in 1892, where they were enthusiastically received as examples of Symbolism, a trend in art and literature of that time, which rejected the industrialized world and its faith in scientific progress in favor of the fantastic, mystical, and dreamlike.

Consequences
The exhibition shows how Degas’s monotype practice impacted his works in other mediums. Degas’s experiments with the essential qualities of monotype—repetition and transformation, mirroring and reversal, tone and tactility—enriched his work in drawing and painting. Understanding that something singular can spark multiple variations and that an image can always be reworked, revised, and recrafted, his approach—especially in his last decades—was characterized by his unceasing pursuit and modification of key subjects across mediums.

Degas traced, inverted, and recombined figures into different arrangements, applying pastel or charcoal on paper, or layering oil paint on canvas to further transform his subjects. The resulting chains of images representing ballerinas and bathers demonstrate how Degas saw iteration as an end in itself rather than a series of steps toward something final or finished. The lessons of monotype also encouraged a new freedom, leading to a more liberated handling of charcoal, pastel, and oil paint and the visible presence of fingerprints. Degas also incorporated many compositional strategies first seen in his dark-field bathers, using his own fingerprints to render figures or their environments and depicting the body in unusual and seemingly impossible positions. The layered washes of the landscape monotypes in particular provoked a productive reliance on tone, resulting in ambiguous and amorphous grounds.

In his monotypes, Degas is at his most modern, capturing the spirit of urban life, depicting the body in daring ways, liberating drawing from tradition, and engaging the possibilities of abstraction. Whether focused on method or theme, Degas’s insistent searching resulted in what the poet Stéphane Mallarmé saw as “a strange new beauty.” Reflecting a spirit of relentless invention and restless improvisation, a deep curiosity about the behavior of materials, a penetrating eye, an affinity for strategies of repetition and seriality, and an incisive understanding of the history of art, Degas’s efforts in monotype not only bridge the fin de siècle, but look forward to developments in the 20th century and beyond.

#qtip – In A Past Recording, Q-Tip Shares The Story Of How Phife Convinced Him To Try Rapping (Audio) – @AFH Ambrosia for Heads
0 (0)