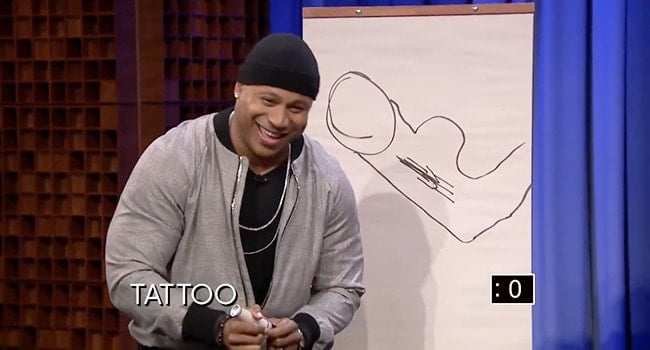 LL Cool and Dr. Dre go back. The pair are in a select class of MCs who had professional musical careers in 1985 and in 2016, having only risen. James Todd Smith has gone from Def Jam Records breakthrough artist to a network actor star and host of the Grammy’s. Dr. Dre went from the sound source of World Class Wreckin’ Crew to become a billionaire-flirting mogul, and Hip-Hop’s ultimate consigliere.

2016 Is Going To Be Busy For Dr. Dre. He Announces Another Musical Project.

Thirty years since they were on the rise, D-R-E and Uncle L are still putting in work. In September, 2015, Cool J appeared on Dre’s Pharmacy radio show on Beats1 (posted below). There, DJ Premier sat in with the pair—fresh off of working on Compton, alongside another O.G. in Battlecat, who was on the one’s and two’s. Heads who tuned in heard a snippet of some footage of LL digging into a Dre beat—that sounds very boom-bap from the master of melody. Now, in March of 2016, Heads can get a teaser sampling of video to show just how real the moment was—and how much LL Cool J means what he raps:

Referencing lines from breakout “I Can’t Live Without My Radio,” Cool J’s bars assert that he is the GOAT–something he has maintained through much of his 31-plus-year career. If that wasn’t enough, the MC hopped on Twitter this week to drive the point home:

Please stop pretending that we all don’t know I’m one of the best to ever touch that mic.. #hiphop

I stepped away and let you breathe. I can cut off air your air supply with one single. Don’t test me.

Heads looking for the full radio show that brought this on, can listen in. There’s is a great Battlecat mix, some historic conversation between the O.G.’s, and Dr. Dre singing WC’s praises. And that’s only the first 20 minutes…

The post: LL Cool J Proves He’s The Original GOAT On A Blistering Freestlye Over A Dre Beat (Video), was published at: AFH Ambrosia forHeads