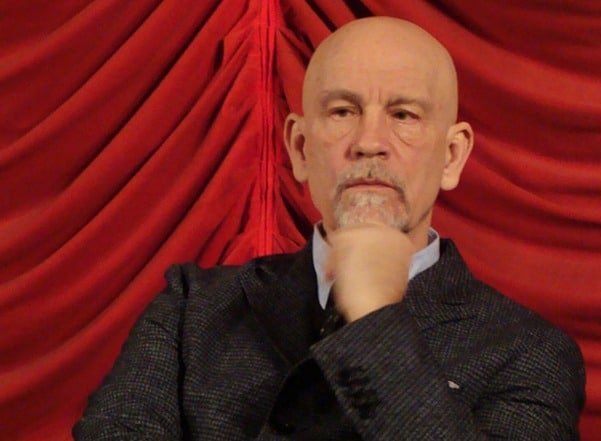 So, imagine that you’re John Malkovich. I know, you’ve seen this movie before, but hear me out: you’re one of the most venerated actors of your generation. You are entering your sixth decade and could probably coast into your golden years on accolades and prestige parts. But do you rest on your laurels? Or do you become amodel and collaborator with photographer Sandro Miller, appear in an Eminem video… read Plato’s “Allegory of the Cave” over an ambient piece of music called “Cryogenia X,” then have the results remixed by Yoko Ono and Sean Lennon, Ric Ocasek, new wave icons Orchestral Maneuvers in the Dark, and other musical legends?

The answer is all of the above. You’re John Malkovich. You can do whatever you want. “When I have an idea for something,” says Malkovich, “I expect my collaborators to collaborate on that idea and if someone else has an idea, then I’ll certainly collaborate with them.” It’s that kind of disciplined, yet genial flexibility that made Malkovich perfect for the role of himself in Spike Jonze’s surreal comedy. Now the last of the projects in that extracurricular list above brings more surreality into Malkovich’s repertoire, in the form of a double LP’s-worth of dreamlike recitations of Plato’s classical myth, called Like a Puppet Show, released on Black Friday of last year.

With original music composed by Eric Alexandrakis, the album came out on vinyl as a 2 LP picture disk featuring photos from Malkovich and Miller’s photo project “Malkovich, Malkovich, Malkovich.” The collaboration recalls other literary musical projects, such as Kurt Cobain and William S. Burroughs’ “The Priest They Called Him” (and Burroughs’ earlier work with Throbbing Gristle),  as well as a recent joint project on Walt Whitman’s Leaves of Grass, with Iggy Pop and electronic composer Alva Noto. But there’s also a disorienting strangeness here those other experiments lack.

Ono and Lennon’s version “Cryolife 7:14,” the second track above, is, oddly, the most conventional of the three digital uploads we get to hear for free. Malkovich reads a portion of the text straight through, over wordless moans from Yoko and psychedelic lounge music from Lennon. In OMD and Ric Ocasek’s renditions, however, Malkovich’s voice gets cut-up into a series of disjointed samples. Rather than tell a story—that ancient 2,500-year-old story from Plato’s Republic about ignorance and awakening—these pieces suggest painful poses, emotional shocks, repetitive conditions, and weird ontological angles. What does it all mean for Malkovich?

It’s hard to say. He’s more steeped in process than interpretation. “Music,” says Malkovich, “creates its own kind of dream state.” If there’s any political subtext, you’ll have to supply it yourself. Malkovich—who gamely dressed as Che Guevara in one of his Sandro Miller recreations of famous photographs—has also been described as “so Right-wing you have to wonder if he’s kidding.” We know, of course, how Yoko feels about things. It’s part of what makes the collaboration so fresh and compelling—it doesn’t feel like one of those “of course these people got together” projects that, while satisfying, can suffer the fate of the supergroup: too many cooks.

Here, each collaborator—the 2,000-years-dead philosopher, the celebrated actor and photographer, and the legendary musicians—comes from such a different realm of experience and talent that their meeting seems more like a mountaintop conference of wizards than a celebrity jam session. If you like what you hear (andsee), Malkovich, Alexandrakis, and Miller promise more. They’ve founded a record label, Cryogenia, and plant to release more musical/photographic projects in the near future.