‘Edgar Degas: A Strange New Beauty’ is the first exhibition in the U.S. in nearly 50 years to examine Edgar Degas’s extraordinary and rarely seen monotypes and their impact on his wider practice. March 26 – July 24, 2016. 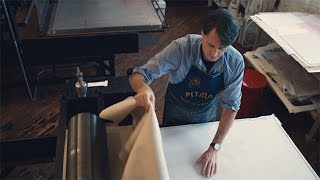 A towering figure in 19th-century art, Degas is best known as a painter and chronicler of the ballet. Yet his work as a printmaker reveals the true extent of his restless creativity, as he mixed techniques with abandon in his studio and shared recipes with colleagues for producing unconventional effects. Captivated by the monotype’s potential, Degas took the medium to new and radical heights, abandoning the academic drawing style of his youth and inventing a new repertoire of mark-making that included wiping, scraping, scratching, fingerprinting, and rendering via removal. The resulting works are characterized by enigmatic and mutable forms, luminous passages emerging from deep blackness, and a heightened sense of tactility. The freedom Degas found in such techniques is an important theme of the exhibition, and the presentation links his efforts in monotype to works in other mediums.

The exhibition surveys these technical innovations and the range of subject matter they explored, including scenes of modern life; harshly illuminated café singers; ballet dancers onstage, backstage, or in rehearsal; the life of the brothel; intimate moments at the bath; and landscapes. To illuminate how Degas saw iteration as an end in itself, key groupings show how Degas traced, inverted, and recombined figures into different arrangements, applying pastel or charcoal on paper, or layering oil paint on canvas to further transform his subjects.

The post: Edgar Degas: A Strange New Beauty – MoMA, was published at: The ArtWolf

No Thoughts on #edgardegas – Edgar Degas: A Strange New Beauty – MoMA – @The ArtWolf0 (0)