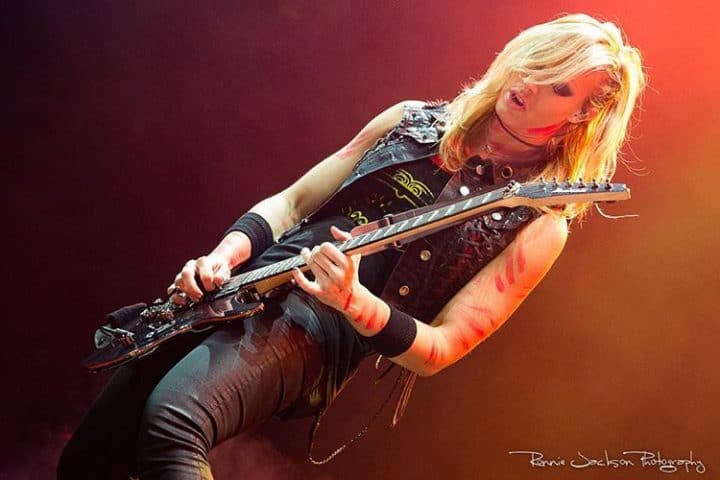 Swiss online guitar learning platform HGuitare.com has uploaded a video clip of Nita Strauss, the Los Angeles-based guitar shredder for the ALICE COOPER band, teaching you how to play the Cooper classic “Poison”. Check it out below.

In a recent interview with Jammcard, Nita spoke about how she got the gig with the legendary rocker. She said: “I did my first round of video auditions, and I just thought, ‘I’m gonna smash it! I’ll knock it out of the park. I’m gonna pull out every stop, playing over the neck, doing all kinds of stuff, playing upside down.’ You know, [I thought I would] play every trick I know, every cool, crazy, demented lick I know. And I sent it over. It was two songs, which are about four or five minutes each. So it should have taken them ten minutes to watch the whole package and think about it. I think [Cooper producer Bob] Ezrin called me within three minutes. He was, like, ‘This is not what we want at all.’ I think his exact words were, ‘Can you do anything else?'”

She continued: “Looking back at it now, ALICE COOPER is a classic rock band, and it was so unwarranted what I did. But I wanted to show off. So I said, ‘Now that I know what you want, can you give me another shot?’ I can’t believe they gave me three shots at it. So that just goes to show you, kids — personality goes a long way.”

Nita added: “A big part of the ALICE COOPER sound is the big classic rock licks, the big, classic thematic kind of… It’s not about going crazy, it’s not about playing super fast. There’s great times for that, but it’s about really sitting back and listening to the song and letting the song breathe. And that was a big lesson for me in this camp.”

Strauss is a longtime Ibanez signature series endorsee who made her name with THE IRON MAIDENS, FEMME FATALE and LA Kiss. 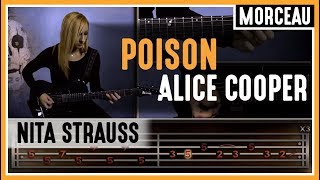 The post: ALICE COOPER Guitarist NITA STRAUSS Teaches You How To Play ‘Poison’ (Video), was published at: Blabbermouth.net