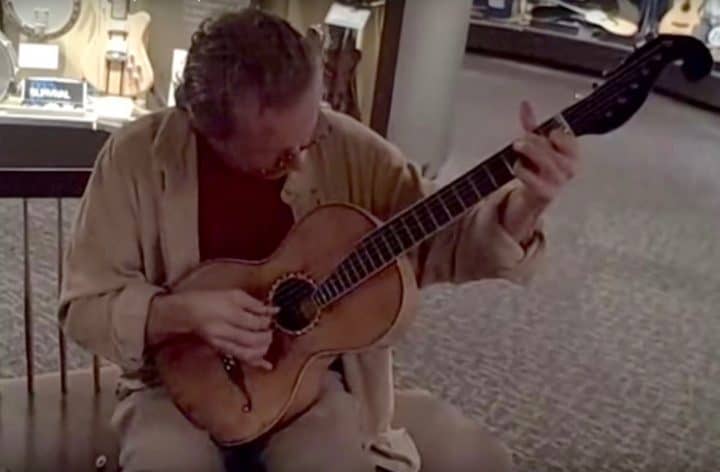 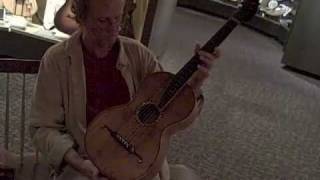 You may have heard the recent hubbub over an antique Martin guitar from the 1870s that ended up smashed to bits on the set of Quentin Tarantino’s ultraviolent Western The Hateful Eight. Maybe you saw people gnash their teeth online and said, “so what? It’s just a guitar!” Fair enough, and a Stradivarius is just a violin. I exaggerate a little, but many guitar lovers who watched the clip of Kurt Russell destroying the priceless artifact (unwittingly, it seems) felt the impact for days afterward. As Colin Marshall wrote in a post featuring that footage, “You can still go out and buy a serviceable guitar from the end of the 19th century without completely wiping out your savings, but you’d be hard pressed to find a Martin made a few decades earlier—such as the one smashed in The Hateful Eight—at any price at all; less than ten may exist anywhere.”

You can see one of those relics above; the oldest known Martin in existence, in fact, made decades earlier than the wrecked guitar from Tarantino’s set—made, in fact, in 1834, just one year after cabinet maker C.F. Martin moved to New York City from his native Germany, where he had run into trouble with the Violin Maker’s Guild who claimed exclusive rights over instrument manufacturing. Martin immediately began producing guitars, like the small-bodied Stauffer-style instrument above, before moving his factory to its current location of Nazareth, Pennsylvania, where theMartin Museum is located. In the video, folk guitarist Stevie Coyle has the pleasure of picking out The Beatles’ “While My Guitar Gently Weeps” and an original tune called “Saltflat Rhapsody” on the aged instrument, which sounds just a little bit like a Medieval lute. 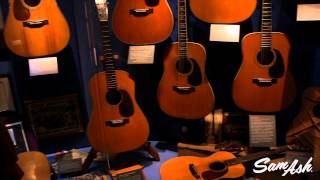 Just above, see Chris Martin IV, great-great-great-grandson of the famed guitar maker and current CEO of the company give a tour of the museum, pointing out what guitar historians believe is the earliest guitar with X-bracing, the innovative inner architecture C.F. Martin supposedly invented when coming up with his own designs and moving away from those of his mentor, Johann Stauffer. After the pain of watching a beautiful vintage Martin smashed to bits in Tarantino’s film, it’s a great consolation—for guitar nerds at least—to see how well the Martin Museum has preserved so much of the company’s history and kept such early models in playable condition.

The post: See The Beatles’ “While My Guitar Gently Weeps” Played on the Oldest Martin Guitar in Existence (1834), was published at: Open Culture