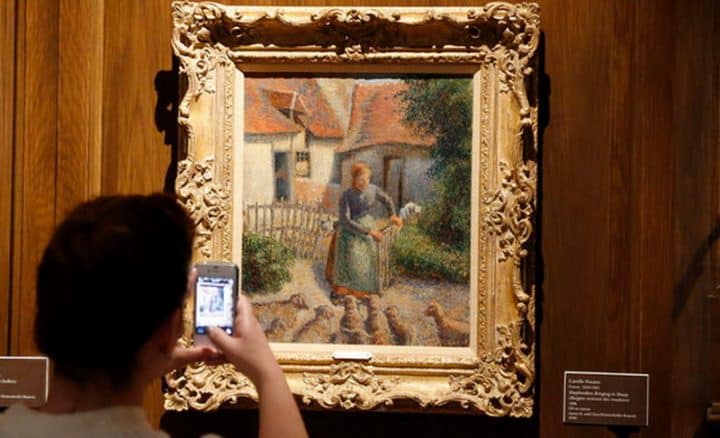 #pissaro – Pissarro painting looted by Nazis and owned by the University of Oklahoma to return to France – @artdaily.org

WASHINGTON (AFP).- A painting by Camille Pissarro will return to a Jewish family in France whose art collection was looted by the Nazis in 1941, a lawyer who led the negotiations said.

The University of Oklahoma will give back “La bergere rentrant des moutons” — or “Shepherdess bringing in sheep” — to Holocaust survivor Leone Meyer, her New York lawyer Pierre Ciric told AFP about the restitution agreement signed Monday.

Meyer is the adoptive daughter of late businessman Raoul Meyer, who was co-owner of the French retail company that owns the upscale department store chain Galeries Lafayette.

He deposited his art collection in a vault at the bank Credit Commercial de France in 1940 before the Nazis seized it during their occupation of France.

The oil-on-canvas painting — valued in its last appraisal at $1.5 million — was later acquired by a Swiss merchant and a New York gallery before it was bought by collectors Aaron and Clara Weitzenhoffer.

They bequeathed it to the University of Oklahoma in 2000.

Under the settlement’s terms, the painting will be displayed for five years in France before it will move on a rotating basis between the University of Oklahoma’s Fred Jones Museum and a French museum.

The deal also requires Meyer to donate the painting to a French art institution during her lifetime or in her will.

“The priority was for public display,” Ciric said about the negotiations, which began after Meyer filed suit in May 2013.

The university drew criticism during the process for objecting to returning the work based on procedural rules and the statute of limitations.

O artigo: Pissarro painting looted by Nazis and owned by the University of Oklahoma to return to France, foi publicado em: artdaily.org

The post: Pissarro painting looted by Nazis and owned by the University of Oklahoma to return to France, was published at: artdaily.org