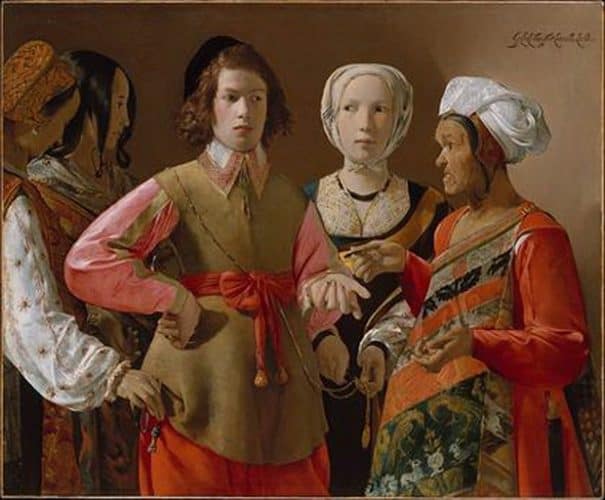 The present exhibition comprises 31 paintings by La Tour, which is an exceptional number given that only around 40 by his hand survive. They have been loaned from prestigious international institutions such as the Musée du Louvre, the J. Paul Getty Museum, the Metropolitan Museum of Art and the Kimbell Museum in Fort Worth, Texas, of which the latter two museums are lending two of the artist’s most essential works, “The Fortune Teller” and “The Cardsharps”, respectively. Also fundamental for the organisation of this exhibition has been the generous contribution made by provincial French museums, which house an important number of works by La Tour, as well as the fact that the two recent acquisitions by the Prado of works by the artist (“Saint Jerome reading a Letter” and “The blind Hurdy-gurdy Player”) have made the Museum an international reference point for the study of this French painter.

Georges de La Tour has only recently been discovered in terms of his artistic personality. Little is known of his early training in the Catholic city of Vic-sur-Seille in Lorraine (France), which he must have completed around 1610 when he was aged about 17. Subsequent documentation reveals him as a financially successful painter with a brusque personality but professionally renowned. At the end of his career La Tour was appointed painter to Louis XIII.

La Tour lived at a crucial period for the history of Lorraine, which culminated with the loss of the duchy’s political independence. Within this context the artist evolved a painting of surprising lyricism, particularly in his nocturnal scenes, nearly all of them religious. These are almost monochrome works with monumental forms, filled with solitude and silence.

The post: Georges de La Tour exhibition at Museo de Prado, was published at: The ArtWolf