One week ago today (February 15), Ice Cube and O’Shea Jackson, Jr. presented Kendrick Lamar with the Grammy Award for “Best Rap Album Of The Year.” The honors went to To Pimp A Butterfly, Kendrick’s latest work. In the speech that followed, the Compton, California MC thanked Ice Cube (along with Nas and Snoop Dogg) for their contributions to music, and the genre—none of the three had ever won a Grammy.

In just over one month (April 30), Kendrick Lamar will be the one to present Ice Cube—and the surviving members of N.W.A. with their inauguration into Cleveland, Ohio’s Rock & Roll Hall Of Fame. Although N.W.A.’s place in the Hall has been known since late last year, today (February 22), Ice Cube confirmed the Kendrick rumor via Twitter: 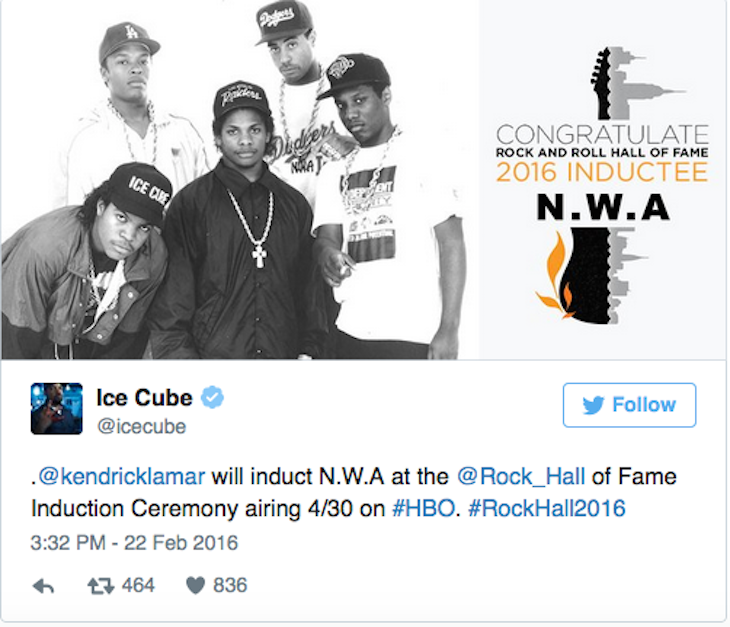 In 2015, Lamar interviewed Cube, Dr. Dre, MC Ren, and DJ Yella for Billboard, on video. He is from the same city of Compton that raised Dre (who signed Kendrick to his Interscope Records-distributed Aftermath Entertainment in 2011), Yella, Ren, and late N.W.A. leader Eazy-E.

N.W.A., standing for Niggaz Wit’ Attitudes, released two albums: 1988’s Straight Outta Compton, and 1991’s Efilzaggin, along with EP 100 Miles & Runnin’, and 1987 compilation, N.W.A. & The Posse. Three of the four projects were released on Eazy’s Ruthless Records. Ice Cube would exit the group in 1989 to pursue an extensive solo career, as well as acting.

This past weekend, Kendrick Lamar and Ice Cube made their collaborative debut, a remix to Funkadelic’s “Ain’t That Funkin’ Kinda Hard.” Kendrick has also worked with Dre on his 2012 album, good kid, m.A.A.d city.

Related: N.W.A.’s Other Member Isn’t Bitter. But He Explains His Absence From Biopic (Video)

The 2016 inauguration will air on HBO.

The post: Kendrick Lamar Confirmed To Induct N.W.A. Into Rock & Roll Hall Of Fame, was published at: AFH Ambrosia forHeads