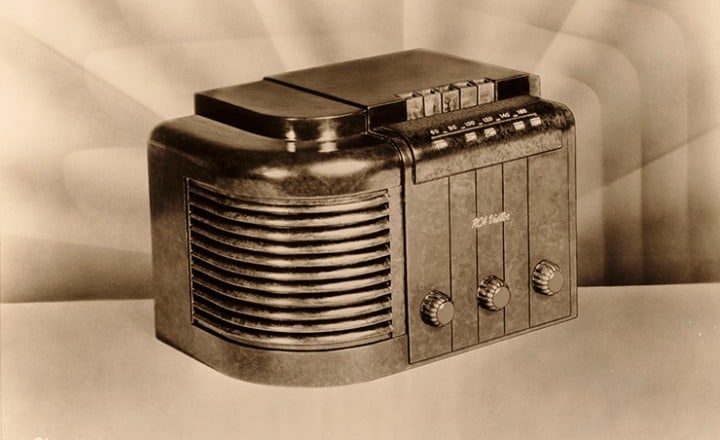 WASHINGTON, DC.- What should a television look like? How should a dial on a radio feel to the touch? These were questions John Vassos asked when the Radio Corporation of America (RCA) asked him to design the first mass-produced television receiver, the TRK-12, which had its spectacular premier at the 1939 New York World’s Fair. Vassos emigrated from Greece and arrived in the United States in 1898. His career spans the evolution of central forms of mass media in the twentieth century and offers a template for understanding their success. This is Vassos’s legacy—shaping the way we interact with our media technologies. Other industrial designers may be more celebrated, but none were more focused on making radio and television attractive and accessible to millions of Americans.

In John Vassos: Industrial Design for Modern Life, Danielle Shapiro is the first to examine the life and work of RCA’s key consultant designer through the rise of radio and television and into the computer era. Vassos conceived a vision for the look of new technologies still with us today. A founder of the Industrial Designers Society of America, he was instrumental in the development of a self-conscious industrial design profession during the late 1920s and 1930s and into the postwar period. Drawing on unpublished records and correspondence, Shapiro creates a portrait of a designer whose early artistic work in books like Phobia and Contempo critiqued the commercialization of modern life but whose later design work sought to accommodate it.

Replete with rich behind-the-product stories of America’s design culture in the 1930s through the 1950s, this volume also chronicles the emergence of what was to become the nation’s largest media company and provides a fascinating glimpse into its early corporate culture. In our current era of watching TV on an iPod or a smartphone, Shapiro stimulates broad discussions of the meaning of technological design for mass media in daily life.

Danielle Shapiro is an independent scholar who has served as senior program officer in the Division of Public Programs at the National Endowment for the Humanities. She earned her PhD in art history and communications studies from McGill University.

“John Vassos is a complex portrait of an artist and designer whose early illustration work criticized the tempo and commercialism of modern life but whose later design work took for granted those same qualities and attempted to accommodate people to them.” —Jeffrey L. Meikle, University of Texas at Austin