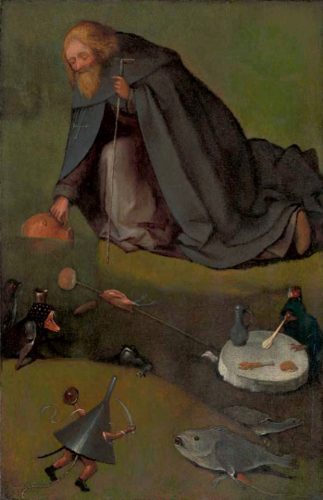 An oil-on-wood panel acquired by The Nelson-Atkins Museum of Art in Kansas City in the 1930s and assigned to the workshop of artist Hieronymus Bosch has now been attributed to the artist himself.

“The Temptation of St. Anthony” was loaned to Het Noordbrabents Museum in Den Bosch, The Netherlands, which is Bosch’s hometown, for a major exhibition celebrating the 500th anniversary of the artist’s death. That exhibition, Jheronimous Bosch–Visions of Genius, opens Feb. 13, 2016.

“We are delighted with this major discovery by the Bosch Research and Conservation Project,” said Julián Zugazagoitia, Menefee D. and Mary Louise Blackwell CEO & Director of the Nelson-Atkins. “When museums lend great works, great things can happen. The scientific and scholarly research behind this authentication is one of the transformative achievements leading up to this exhibition, and Kansas City and the arts community is anxious to celebrate its return to see this elevated masterpiece through new eyes.”

In a news release, BRCP called the attribution “a significant addition to the small body of work produced by Hieronymus Bosch.” The painting, which dates from 1500 to 1510, was last on view at the Nelson-Atkins in 2003. The interest of the BRCP team was piqued when they saw the painting in the Nelson-Atkins catalogue and requested a copy of an infrared reflectogram that allowed them to study the underdrawing of the panel. The team was finalizing details of the exhibition and, intrigued by certain details in the panel, came to the Nelson-Atkins in September 2015 to study the panel in person. Assisted by Rima Girnius, Associate Curator of European Painting and specialist in the Early Modern German and Dutch art, and Scott Heffley, Senior Conservator, Paintings, they performed a number of technical examinations that confirmed their earlier impressions.

“Discoveries such as this do not occur on a regular basis, and I feel incredibly fortunate to have been present,” said Girnius. “There are 25 paintings attributed to Bosch in the entire world with only four in the U.S. Now there are five and one of them happens to be at the Nelson-Atkins.”