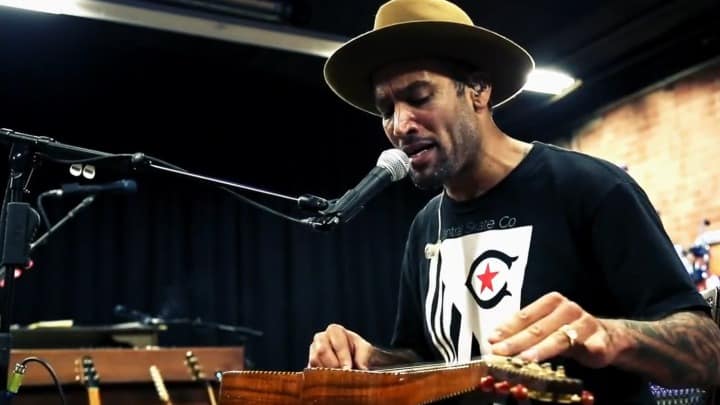 Last September at L.A.’s Fonda Theatre, an eclectic crew including Brian Wilson, Norah Jones, Wayne Coyne, Britt Daniel, Conan O’Brien and “Weird Al” Yankovic came together to perform at George Fest: A Night to Celebrate the Music of George Harrison. The night was a longtime dream of Dhani Harrison, who, while overseeing the remastering of his father’s Apple catalog, envisioned a small club show with his favorite musicians bringing some of his father’s deeper solo tracks to life. “I never thought about what our generation was capable of and how much they actually appreciated his music,” Dhani Harrison said. “I’ve been reduced to tears several times by unexpected performances.”

One of those highlights was Dhani’s close friend Ben Harper’s take on “Give Me Love (Give Me Peace on Earth)” off Living in the Material World, the 1973 follow-up to All Things Must Pass. “To me it almost doesn’t get its just deserts,” Harper says. “When you talk about George songs it’s not one of the first five that usually come up. You know, between ‘Here Comes the Sun’ and ‘My Sweet Lord,’ that one kind of gets lost in the shuffle in a way. Maybe I’m completely wrong about that, but from an outsiders perspective, and for me, it’s one of my favorites. I wanted to jump at that. And it’s hard.”

Harper says he “worked [his] ass off” to correctly deliver the song. “You could get up there and do a hack version of it,” he says, “but if you wanna do it justice and serve the song the way that you can only hope would make him proud, you’ve gotta put the time in, because there are rhythmic intricacies that play off of vocal intricacies. And by the way, George is one of the five greatest slide guitar players of all time. And it’s real tricky.”

The full concert will be available tomorrow on CD/DVD, CD/Blu-Ray, a set of three vinyl LPs or digital download.