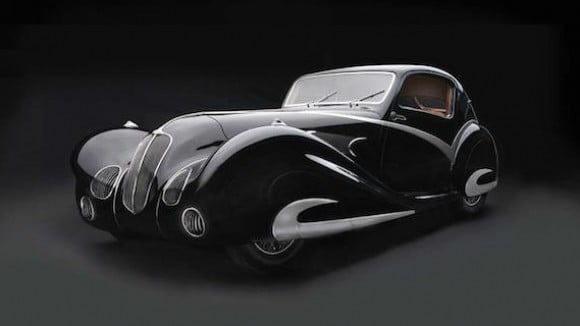 Museum of Fine Arts, Houston, presents ‘Sculpted in Steel: Art Deco Automobiles and Motorcycles, 1929–1940’, an exhibition that celebrates the cars and motorcycles designed during this iconic period. February 21 to May 30, 2016.

The American and international examples featured in “Sculpted in Steel” display the classic grace and modern luxury of Art Deco design—the innovative, machine-inspired style that developed between the two World Wars. The Art Deco movement began in France in the early 1910s, but its development was interrupted by the outbreak of World War I. The style reemerged across Europe after the war and was propelled to international prominence with the success of the International Exhibition of Modern Decorative and Industrial Arts in Paris in 1925. During this period, automakers embraced the sleek iconography of streamlining and introduced industrial materials to present aircraft-inspired body styles. Grilles and hood ornaments, headlamps, windows, and instrument panels are just some of the elements that were transformed through the use of chrome detailing and innovative aerodynamics.

Ken Gross, a noted automobile expert and former director of the Petersen Automotive Museum in Los Angeles, worked together with Cindi Strauss, the Museum’s curator of modern and contemporary decorative arts and design, on the selection for the exhibition, which draws on a concept originally developed for the Frist Center for the Visual Arts, Nashville.

“The 1920s to 1930s proved to be one of the most creative eras for international design in all mediums, and Art Deco styling influenced everything from fashion and fine art to architecture and autos,” said Gary Tinterow, Museum director. “Sculpted in Steel includes rare and one-of-a-kind examples that epitomize the artful approach to industry employed by the leading auto designers of the day. These dramatic automobiles and motorcycles are truly works of art.”

The post: Sculpted in Steel: Art Deco Automobiles and Motorcycles, 1929–1940, was published at: The ArtWolf