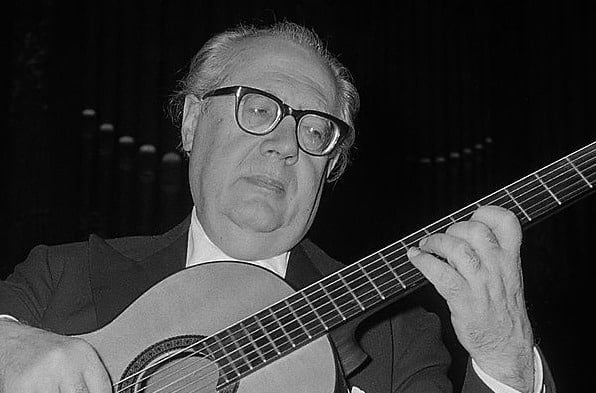 “Electric guitars are an abomination,” the great Spanish classical guitarist Andrés Segovia reportedly said, “Whoever heard of an electric violin, electric cello or, for that matter, an electric singer?” We’ve now heard all those things, more or less, and civilization has not yet collapsed around our ears. Segovia, it’s said (by his most accomplished student, no less) was a bit of a snob. Or put another way, he was a purist. And while that quality may have made him a difficult person at times, and a very exacting teacher, it also gave him such devotion to his instrument, and the classical music he interpreted with it, that we will always think of the name Segovia when we think of classical guitar.

Segovia’s “mere name,” writes Joseph Stevenson, “was enough to sell out houses worldwide.” A prodigy whose technique was “superior to that which was being taught at the time,” Segovia made his debut at the age of 15. Just a few years later, he played Madrid, the Paris Conservatory, and Barcelona, then, in 1919 made a “wildly successful” tour of South America. When he returned, the composer Albert Roussel wrote a piece specifically for him, which he performed in Paris, “the first of many works,” Stevenson writes, “written for him by distinguished composers…. There were classical guitarists before him, and distinguished ones even when he appeared, but it was not an instrument that was regarded as a serious vehicle for classical music. Segovia personally changed that.” 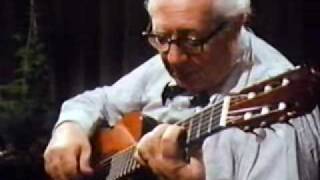 Being a pioneering instrumentalist in the classical world, Segovia was obliged to transcribe the music of his favorite composers for the guitar, including works by Haydn, Mozart, Chopin, Handel, and, as we feature here today, J.S. Bach. At the top of the post, see him play the Prelude to Bach’s Suite in G Major, written for the cello. Below it, he plays Bach’s Gavotte, also written for cello. Just above, hear the Suite in E Minor, written for the lute, and below, the Partita in E Major, penned for the violin.

Segovia’s contribution to classical music is inestimable, and though he may have looked down on popular musicians with electric guitars, many have adored him. Ringo Starr is a big fan (Segovia inspired him to pick up classical guitar). Punk frontman Ian Drury namechecked the classical master in a song. And Segovia has more in common with pop musicians than he would have ever liked to admit—taking up guitar against both his parents’ strong objections and becoming a self-taught superstar at an early age. He may be firmly ensconced in the classical world musically, but as far as his fame and reputation goes, Segovia was a rock star.
(…)